Nasrat Haqparast will be back in action at UFC 284. The lightweight will be looking to make it back to back wins when he takes on Jamie Mullarkey in Perth on February 12th.

Haqparast (14-5) was born in Germany but is ethnically Afghan. The 27 year old is a veteran of ten UFC fights and has been on the roster since 2017.

He will probably get a hostile reception from the fans in Perth. Mullarkey (15-5) is Australian and comes into this contest on good form having won three of his last four fights.

Local favourite Alex Volkanovski (25-1) will be moving up in weight to challenge for the lightweight title. The Australian is the current 145lbs  champion and ranked #1 on the UFC’s pound fir pound list.

Israel Makhachev (23-1) will be making the first defence of the belt he won by beating Charles Oliveira at UFC 280 in Abu Dhabi. The Russian is a protege of former lightweight champion Khabib Nurmagomedov.

Mingyang Zhang has signed with the UFC. The Chinese light heavyweight will make his debut in Perth on February 12th and has been matched with Tyson Pedro according to reliable reports.

Zhang is riding a nine fight winning streak that culminated in a victory over George Tokkos at Road to UFC 1. He stopped the English fighter in the first round and it was considered a major upset at the time.

Zhang has reportedly been rewarded with a spot on the roster and a debut at UFC 284:

But for Zhang (16-6) it will be a big step up in terms of opposition. The majority of his previous victories have come at the expense of fighters who don’t have particularly impressive records.

Six of the last nine fighters he faced had losing records. But the 32 year old clearly caught the eye with his knockout win against Bellator veteran Tokkos in Singapore.

Pedro (9-3) will be fighting in his homeland and looking for a third straight UFC win. He has been on the roster since 2016 and has won five out of his eight fights inside the octagon.

With two wins to his name already this year the Australian has a lot of momentum behind him coming into this contest and will be sure to get vocal support from the crowd at the RAC Arena. It looks set to be a baptism of fire for Zhang.

#1 ranked middleweight Robert Whittaker (24-6) will take on #6 ranked Paulo Costa (14-2). The latter is the former middleweight champion but lost his crown to Israel Adesanya and then came up short in the rematch.

UFC 284 took place in Melbourne in 2019 with Adesanya knocking out Whittaker in the main event. In total there have been 15 events put on by the promotion in Australia. 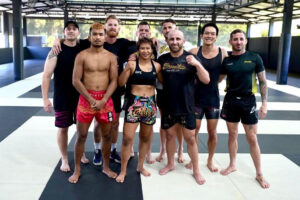