As a former Sports Writer’s ‘Fighter of the Year’ and multiple time Lumpinee and Rajadamnern champion Nong-O Gaiyanghadao has clearly reached the pinnacle of the sport of Muay Thai.

But on Friday he reaches another landmark as the Thai will feature in the first Muay Thai fight to ever headline a ONE Championship card in the Singapore Indoor Stadium. The venue is the promotion’s spiritual home, and played host to the inaugural event in 2011.

The significance is not lost on Nong-O who has called Singapore home for several years,

“This is my first time fighting in Singapore and I am really excited. I am very grateful to be able to perform in front of my friends, my family, and my students. I am feeling really confident and I focused on training really hard.” 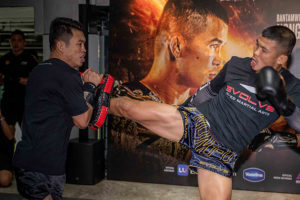 The reigning bantamweight champion will put his belt on the line against compatriot Saemapetch Fairtex at ONE: ‘Edge of Greatness’ on Friday night. It is the first time in ONE Super Series history that two Thais have faced one another and Nong-O is well aware of the threat posed by his opponent,

“Saemapetch is a good fighter, he has really good boxing, he’s very strong and a smart fighter too. He’s also still very young and is in very good shape. He has knocked a lot of people out. I’ve been watching him on YouTube, and I haven’t yet seen a weakness in him,” he said.

Saemapetch never enjoyed quite the same level of success as Nong-O in Thailand. The champion is entitled to feel he has beaten better opponents and believes his speed could be key,

“I have a couple of advantages that should help me get the win. Definitely my speed, I think I’ll be faster than him. Also I think my kicks are better than his. I am ready to fight hard and give everything for the watching fans.” It might be significant to ONE Championship fans that two Thais are facing off for the first time. But Nong-O has faced hundreds of his countrymen in the past and isn’t fazed by the prospect,

“It is my duty to fight. Whether it is a Thai or a foreigner, I have to do my utmost. It is normal to me, and normal in Muay Thai. I’m not thinking too much about it. I will fight with dignity and do my very best.”

Nong-O is enjoying a new lease of life with ONE Championship. He is fighting in front of big crowds all over Asia but is not expected to compete every six weeks or so like he was during his heyday in Thailand.

His career has had plenty of highs. But having lived in Singapore since 2015 Nong-O is particularly excited about the prospect of competing in front of all his friends and family in his adopted home,

“To be able to defend my title here will be a special moment in my career. I am looking forward to victory and I can’t wait to give my best for the crowd.” 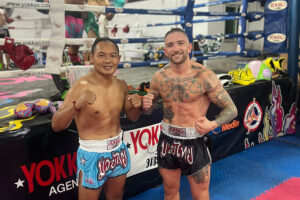