Nori Pravajra, formerly known as Nori Date, challenges for the Pancrase strawweight title on Sunday. It will be the first time the photogenic 23 year old has fought for a belt.

She faces Takayo Hashi who Nori describes as an ‘all rounder’,

“I’ve always seen her on the women’s MMA scene, and she’s won some titles. She’s a good all-rounder. Her timing is good and when she goes in for the kill she goes all in.” 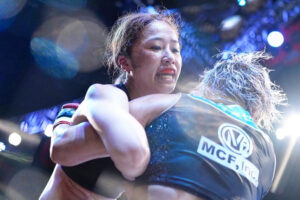 Hashi is much more experienced but Nori hopes there will be a changing of the guard at Pancrase 324,

“For me it seems she doesn’t get knocked out or submitted, she’s very patient, so I have to turn the tables and finish her and bring in the new generation.”

While her opponent has more than three times as many fights Nori thinks she poses a different type of challenge,

“I don’t think she’s faced someone with the standup game, movement and plenty of kicks like mine, but she’ll be sharp. As long as I stick to my style and plan, I’ll get the win.” Nori has studied her opponent’s previous title fights and spotted some holes in her game,

“Looking at her last title match against (Sidy) Rocha, I think maybe she’s not good with long-reach opponents that strike from the outside.”

It sounds like the game plan will be to stay in the outside and stick and move,

“Although she’s good all round, I get the strong impression that she wants to grapple and go to the ground. If I land some solid strikes from the outside, take my time to find the spots, I think it’ll go well for me.” Going for the kill

Nori is used to fighting more experienced opponents and says she is used to it,

“I’ve been going against fighters way above my experience since I debuted, my whole career, so the pressure is no problem.”

The fight is scheduled for five rounds but the 23 year old doesn’t plan to let it last that long,

“It’s my first time to fight a 5-round match, so I don’t know how it’s going to play out, but I’m going in for the kill quickly.”