This Friday’s ONE: ‘Heavy Hitters’ event has been hit hard by Covid-19. The 12 fight card will now consist of just eight bouts with multiple fighters removed at the last minute.

The light heavyweight kickboxing title fight is off. Murat Aygun was unable to compete due to Covid-19 protocols and the promotion was unable to find a replacement opponent for reigning champion Roman Kryklia.

The middleweight matchup pitting Leandro Ataides against Yushin Okami is off. The Brazilian was removed from the card due to Covid-19 protocols leaving the Japanese veteran without an opponent.

The flyweight Muay Thai fight between Elias Mahmoudi and Walter Goncalves has also been scrapped for Covid-19 related reasons. Jeremy Miado and Robin Catalan have been ruled out too but there opponents will now fight each other.

Japanese veteran Senzo Ikeda will take on Indonesia’s Elipitua Siregar in a strawweight fight. The former was originally scheduled to take on Miado while the latter had been matched with Catalan.

The main event is still intact with a strawweight title fight booked. Xiong Jing Nan will defend her belt against Ayaka Miura.

The entire event will be broadcast live. 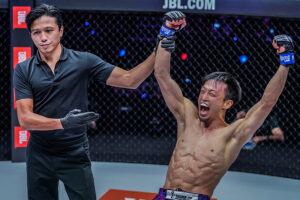