ONE: ‘Masters of Fate’ is a family affair for strawweight challenger Rene Catalan

Rene Catalan has a unique predicament this Friday as he will be challenging for a title and acting as a chief cornerman.

Catalan faces reigning strawweight champion Joshua Pacio in the main event of ONE: ‘Masters Of Fate’ while his younger brother, Robin, will also be competing on the stacked card as he squares off with Olympic wrestler Gustavo Balart earlier in the evening.

It will not be the first time that both family members have fought at the same ONE Championship event. Not only does Catalan have to focus on his own title bout but he also has to deal with the pressure of coaching his younger sibling to victory,

Although ONE: ‘Masters Of Fate’ will be a busy night for Catalan, it also presents an opportunity to make history. He’s a multiple time wushu world champion but has never won a title in MMA and is hoping to make it a double celebration,

“It marks the second time that I will compete alongside my brother in the company. It’s exciting. I hope that we will walk away as winners of our respective bouts. It will cause a big family celebration,” he said.

The veteran martial artist from Iloilo City is arguably the hottest athlete that ONE Championship has right now with six straight wins but this is clearly the biggest match of his career,

“I’m really excited for this fight. You all know how I’ve been praying and asking for this title shot. I think I earned this opportunity after winning my past six fights, and I will make sure not to waste this,” he said. 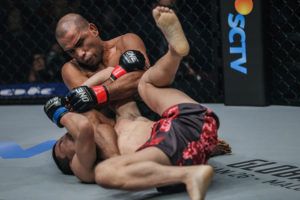 Fans in the Philippines have not always embraced the idea of seeing two of their compatriots face off. Even Catalan himself had some doubts when he was first offered the fight,

“Before I declined because I support my countrymen in MMA, but we’ve been receiving harsh words from their fans that Pacio will knock me out in less than 15 minutes, so I thought about it really hard,” Catalan admitted.

Patriotism has always been a priority for the Asian Games gold medalist, and that’s why he was adamant in saying no to an encounter with Pacio. But eventually his competitive spirit kicked in,

“With the things being said now from their fans, I’m beginning to get tired of it. I wouldn’t back down from any challenge. When their fans told me that Pacio would knock me out, it lit a fire in me. Enough is enough. I am here for the challenge,” Catalan declared. Catalan knows that he is up for an arduous night against the Team Lakay representative. Pacio is younger, more experienced in MMA terms and fights out of the country’s most renowned camp,

“Joshua is really an outstanding fighter. He knows how to be a champion. He is young, and he has an excellent camp. There are a lot of people who can help him, and I know that I’m the underdog in this fight,” he said.

Pacio is known for his highlight-reel victories and thrilling, fast-paced contests. His unpredictable approach and willingness to go all-out in search of a finish are likely to give Catalan a stern test, but with a careful analysis of his previous matches, the latter feels that he has what it takes to get his hand raised in triumph,

“I always watch and study his old tapes, and I have no doubts that Pacio is really good. He’s a really good fighter. But I am confident that I can win. Momentum, experiences, and skills—those are my weapons in getting that big win,” Catalan explained. 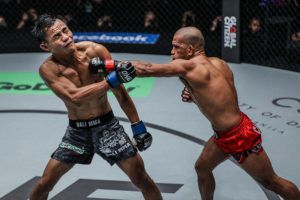 Knowing that this might be the last time that a window of opportunity like this opens, Catalan is determined to leave it all in the cage,

“This could be my last shot in becoming a world champion, so expect that I’ll give my all. I know I’ll be facing a great champion, but this is my time now. I’m ready to collect my seventh straight win and go home as the new champion,” he vowed.

Catalan has stopped three of his last six opponents, with the other three wins coming by way of decision. But he is not just ready to fight for the full 25 minutes on Friday, he is expecting it,

“I am really determined to win, that’s my advantage. Unanimous decision. That’s how I see this match is going,” he predicted.

“I’ll give everything when we meet. I won’t be giving an inch.”