Robin Catalan wants to make ONE: ‘Masters of Fate’ a marquee night for his family

ONE: ‘Masters of Fate’ promises to be a big night for the Catalan family. While all eyes will be on Rene, who challenges for the strawweight title in the main event, Robin also has a huge matchup booked.

The 31 year old will face Gustavo Balart in a strawweight bout. It will be Catalan’s ninth ONE Championship fight but he’s never managed to put together the sort of winning streak that earned his older brother a title shot.

Catalan has won four out of his previous eight bouts for the promotion. But his older brother was winless in his first three ONE Championship bouts before earning a title shot on the back of a six fight winning streak.

The younger sibling would like to put together a similar run of wins and wants to get the process underway by beating Balart next Friday,

“I have a lot of plans next year and I don’t want to end this year with a loss,” he said. His brother has improved dramatically since making his ONE Championship debut. Catalan would like to enjoy a similar trajectory and wants to showcase his new skills at the MOA Arena next week,

“I’m really excited for this match. This is where I will prove that I have improved, especially on the ground,” he says.

Balart’s ONE Championship career has not exactly gone to plan. The Cuban has dropped decisions in both his previous matches for the promotion.

In his last fight Balart was repeatedly rocked by Chan Rothana. Catalan believes that his wushu based striking could give him the edge,

“It will be a big factor in getting a win against Balart. I’ll keep my distance, and I will maximize all my advantages so I can get the win.” His opponent is a decorated wrestler but Catalan says he is well prepared,

“We all know about the quality of his wrestling, but I am confident in my skills. I know he’s done a lot in his career and I’ll have my hands full.”

No title has changed hands more frequently than the strawweight strap. Four different fighters have worn the belt and Pacio is currently in his second stint as a champion.

It leaves the division wide open. Catalan is obviously hoping to see his brother become the fifth man to wear the crown nearly a decade separates the siblings so he’s entitled to feel his time will come. 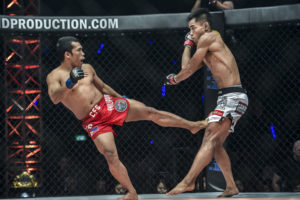 A win next week will be vital to keep that dream alive. But it clearly won’t come easy against an opponent who once won a gold medal in wrestling at the Pan American Games,

“I expect him to be really physically strong but I’ve been training hard on my wrestling defense while sharpening my striking at the same time,” he said.

However Catalan has experience on his side. He’s won four ONE Championship fights, while his opponent has yet to win a single bout for the promotion.

He will also have the Filipino fans at the MOA Arena firmly behind him and Catalan is determined to score his fifth ONE Championship win,

“I’m very excited and ready for this match. I’ll do everything to get that win in front of my compatriots.”