Otgonbaatar Nergui says he will knock out Rahul Raju

Otgonbaatar Nergui started wrestling as a child. The Mongolian knew from a very early age that this was a path he would follow for his whole life,

“I was a very energetic and athletic child who enjoyed many sports but deep down, I always knew that wrestling and martial arts were my destiny. I always knew I was good at this kind of sport. It was in my blood.”

Nergui is scheduled to face Rahul Raju at ONE: ‘Battleground’ Part II. The 34 year old has had to wait a long time for this opportunity but is determined to make the most of it,

“I want to be one of the best and most popular fighters in this promotion. That’s my goal and dream. I think I have enough skills, strength, and will to make this dream come true.” 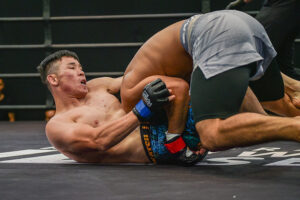 Raju is listed as being a couple of inches taller than Nergui but the Mongolian is under the impression he will be much smaller than his Indian opponent,

“He has a ten centimeter height and reach advantages over me (but) I think I can outmaneuver and outpace him with my flexibility and cardio.”

Nergui says he is no stranger to fighting taller opponents,

“I know from my previous experiences that it’s very difficult to fight someone who has long arms and legs. Such fighters can strike from a distance. I’ve watched his previous fights on YouTube and developed specific tactics based on it. Like most tall and heavy fighters, he seemed like a very slow-moving and inflexible fighter.” While this will be his first time performing on the big stage Nergui does have plenty of experience. He brings a 5-2-1 record into his ONE Championship debut having competed as a professional since 2010.

There are some familiar faces on his resume too. His two losses came at the hands of former ONE Championship featherweight champion Narantungalag Jadambaa and Road FC veteran Nandin-Erdene Munguntsooj.

Nergui is coming off an impressive first round submission win over Takuya Nagata at ONE Warrior Series 8 in 2019 and is very confident he will be able to finish Raju in a similar timeframe,

“For me, this battle can end in only one way, me knocking out Rahul in the first round. I think I can knock him out, no doubt.” Several Mongolians have enjoyed success with ONE Championship most notably Jadambaa who held the featherweight title from 2014 to 2015. Munguntsooj wants to continue this proud tradition when he represents his country at the Singapore Indoor Stadium,

“Mongolians have always been talented in martial arts, it’s in our blood. Although our country has a population of only 3 million, it has never lacked brave, talented, and skilled fighters.”

He might have left it late to make his ONE Championship debut but the Mongolian has been training virtually his entire life for this moment. At ONE: ‘Battleground’ Part II he will be looking to make up for lost time with a win over a promotional veteran.