When Patricio Freire made his MMA debut in 2004 the best Brazilian fighters were still competing in Japan. The likes of Royce Gracie, Wanderlei Silva, Antônio Rodrigo Nogueira, Ricardo Arona and Anderson Silva were all on the Pride roster.

So it is no surprise that the Brazilian has fond memories of Japanese MMA. He has also experienced the current scene, having traveled to Osaka and Tokyo to corner younger brother Patricky Freire for his Rizin fights.

Freire currently holds the Bellator 145lbs and 155lbs titles but would like to follow in the footsteps of Brazilian legends by fighting in Japan,

“If Bellator and Rizin agree to it, it would be an honor for me. I always wanted to fight in Japan since back in the Pride days.” 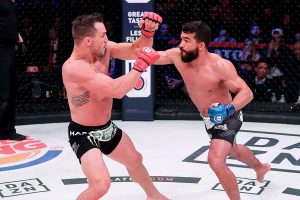 Freire has been on the Bellator roster for a decade. But he was still blown away by the two Rizin events he attended,

“It was a great experience and the Rizin shows were incredible. The production there and the audience are something you have to see live to really understand.”

At Rizin 20 he was in his younger brother’s corner for the lightweight Grand Prix final. Tofiq Musaev got the nod from the judges and won the tournament but Freire disagrees with the decision,

“I don’t think my brother lost that fight and I believe it would be different if he didn’t have a broken hand. Tofiq is a great fighter and seemed to be a great person, I would like to see them rematch in Bellator or fight for the Rizin lightweight title.”

Holding two Bellator belts concurrently, it is difficult to see what else Freire could achieve with the American promotion. He says he would be interested in challenging for a Rizin title like Darrion Caldwell did,

“I want to get more belts and beat more records. I believe the evolution of the sport will be to have open cross-promotions with champions of different organizations facing each other from time to time. That’s definitely something that would be on my radar.”

Freire was scheduled to face Pedro Carvalho in the quarter finals of the Bellator 145lbs tournament last month. He had expected to fight multiple times this year and is disappointed to find himself on the sidelines,

“It’s a big blow, because I had an idea of how many fights and when I’d be fighting this year. This changes everything. But there are people in worse situations, so I can’t complain that much.” 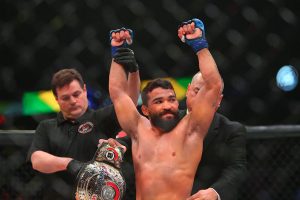 He has been trying to continue training during the coronavirus, or Covid-19 crisis but admits it is a challenge,

“The gym is closed, we’re limited at what we can do. We can’t go out and and have to take several extra precautionary measures. But we are healthy and we are able to take care of ourselves, so I’m thankful for what I have right now but I hope we can get past this soon. Life needs to move on. Hopefully a cure will be found.”

When the time comes for Freire to fight again the Brazilian says he will be ready regardless of the timescale,

“I can’t train wrestling or jiu jitsu but I’m in shape and I’d be ready to fight tomorrow if it was possible.”

He has already won two Bellator tournaments and Freire still expects to face Carvalho in the quarter final. His ambitions are very simple,

“I’m gonna shut him (Carvalho) up for good. The tournament will go on and I’ll get that title too.”