Matrix Fight Night 4 commenced on Friday night at the Al-Nasr Sports Club in Dubai. It was the organization’s first trip outside of India and a welterweight grudge match between Jason Solomon and Pawan Maan Singh headlined the show.

Solomon was victorious in the first encounter back in 2018 under the Super Fight League banner. Most gave him the advantage going into the second meeting but the rematch did not play out like that.

Solomon stayed on the outside and utilized his length to land stiff jabs and leg kicks at the start of the opening round. Something triggered Singh and he began to chase his opponent around. 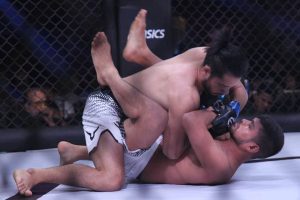 A left grazed Solomon and he went down while trying to escape. Without much being done, the referee restarted the fighters in the center of the cage upright.

After some cat and mouse games, Singh cornered Solomon and tried for a takedown. They fought tooth and nail for positioning and ended the first frame in a stalemate.

At the start of the second, there was a strange moment where Singh looked to injure his foot while his opponent rushed forward when the bell rang. Solomon did not take advantage of the situation and that proved to be a costly error in the end.

They once again entwined in the clinch along the fence and battled. While Singh was pressing to take the fight to the ground, Solomon defended well and countered with guillotine attempts. 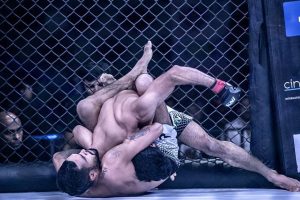 Singh finally dragged his foe to the canvas only to get reversed and have his back taken. A choke had him in deep trouble yet somehow he powered out and regained top position.

After some ground and pound, Singh stepped back and then reengaged on the ground. Between rounds, Solomon’s corner waved off the contest stating that the fighter had broken his wrist.

Singh exacts revenge and elevates himself to a 6-2-1 record while Solomon suffers the first consecutive losses of his career and drops to 8-3. 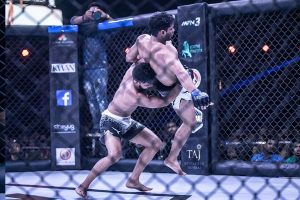 The co-main event had two undefeated fighters, Anshul Jubli and Rajith Chandran, battling it out in a lightweight contest. Both met in the middle and traded kicks early on.

Although Jabli was getting the better of the exchanges, he decided to clinch along the fence and dropped his opponent to the canvas. Directly landing in half guard, devastating elbows and punches came shortly thereafter. With no answers off his back, Chandran was in deep trouble.

After passing to side control and then into north-south position, Jabli used the kimura grip to slide into full mount. Chandran was able to weasel out but had to fend off two more submission attempt and ended up with a human backpack.

Flatten out and nowhere to go, Chandran absorbed multiple power shots to the side of the head until the referee stepped in to close the show. Jabli picks up his first finish and extends his unbeaten record to 3-0 while his opponent drops to 2-1.

In the knockout of the night, Ravinder Balhana (7-3) snapped a two-fight skid by connecting with a right hand that collapsed Abhishek Rana (2-3) at the end of the second round. The SFL veteran obtains his fifth straight finish and instantly becomes a welterweight contender for the promotion.

Matrix Fight Night 4, Dubai, February 29th
Pawan Maan Singh def. Jason Solomon via TKO (Corner Stoppage) at 5:00 of Round 2
Anshul Jubli def. Rajith Chandran via TKO (Punches) at 4:44 of Round 1
Ravinder Balhara def. Abhishek Rana via KO (Punch) at 3:39 of Round 2
Ishika Thite def. Naipunya Sunil via Decision (Unanimous) at 5:00 of Round 3
Vikas Ruhil def. Kuldeep Singh Sekhon via Submission (Americana) at 2:55 of Round 2
Sanjeet Budhwar def. Shyamanand via TKO (Strikes) at 3:39 of Round 1
Sumeet Khade def. Pawan Goyat via KO (Headkick) at 1:45 of Round 1