Matrix Fight Night 5 took place at the Palazzo Versace Hotel in Dubai on Tuesday night. In the headliner Pawan Maan won the rematch by earning a unanimous decision on the scorecards against Sandeep Dahiya.

It was Dahiya who attacked first by snapping the neck down and wrapping up the guillotine while pulling guard. Maan was able to work his head out of the choke by staying calm and patient.

Once he looked to be free and clear, Dahiya threw up the armbar and then got slammed. Instantly, Maan was in trouble again with leglock attempts but freed himself to get back to the feet where he clearly had the advantage. Surprisingly, Pawan tried for another takedown and got stuck in another guillotine. He escaped and slid into side control then into the mount. While Dahiya was bucking wildly, Pawan was able to land some decent punches.

The second started with both fighters loading up without much landing clean. Around two minutes mark, Pawan connected flush with a straight right, left hook combo that had his opponent on queer street. Another right hand and Dahiya dropped to the ground eating a myriad of shots.

Dahiya shook off the cobwebs and obtained full guard yet Pawan dropped down hammers. After the referee stood up the fight, the onslaught continued. Heading into the final round, Dahiya looked recharged and light on his feet. While Pawan swung wildly, his adversary was chopping the legs and connecting with punches. 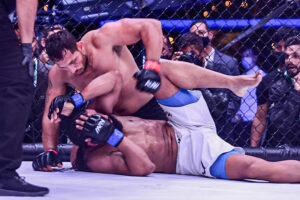 When it looked like there was going to be a comeback, Pawan blasted a right hook that floored Dahiya to the canvas. The round ended with both men running around the cage.

Pawan picks up the decision to stay unbeaten in his last four fights and elevates his record to 7-2-1, while Dahiya loses for the first time by decision and drops to 14-5-1. ‘The Delhi Don’ Jason Solomon got back into the win column by submitting Ravinder Balhara in the second round. The 36-year-old snaps a two-fight skid and moves his record to 9-3 while Balhara has been finished in his last three out of four and drops to 7-4.

Earlier in the night, Sumeet Khade (11-4) and Sanjeet Budhwar (6-1) earned impressive first round finishes. Khade added another knockout to his highlight reel with a flying knee that collapsed Angad Bisht (5-3) while Budhwar bum-rushed Chaitanya Gavali and hammered him down in 15 seconds with a liver shot. 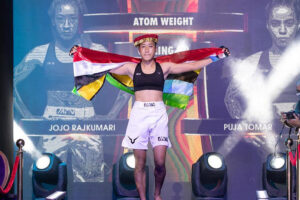 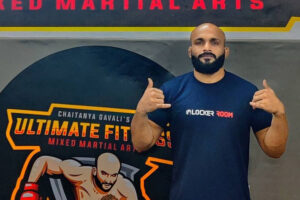