Glory has two big events scheduled for the Wintrust arena Chicago on the 22nd and 23rd of November. The latter show is headlined by Thai superstar Petchpanomrung Kiatmoo9 who defends his featherweight crown against Alexei Ulyanov.

This will be Ulyanov’s second fight against the slick Thai fighter after Petchpanomrung took a unanimous points win over Ulyanov back in 2017. That was the Russian’s Glory debut and he bounced back from the defeat strongly.

After another points loss to Giga Chikadze and a no contest, after a clash of heads with Bailey Sugden, Ulyanov has showed a strong run of form to earn a shot at Petchpanomrung’s belt. He’s scored wins over Zakaria Zouggang, Massaro Glunder and Masaya Kubo.

Petchpanomrung has been on fire since their first encounter with the only blemish in his 11 fights for the promotion a controversial points loss to Robin Van Roosmalen. He avenged that defeat by beating the Russian at Glory 59.

The Thai featherweight’s last fight against Anvar Boynazarov at Glory 67 was a kickboxing masterclass. Petchpanomrung dominated with slick movement and razor sharp left kicks and punches to claim a comfortable win.

The show’s co-main event sees Anvar Boynazarov try to get back in contention for another try for the belt, with a match against the hard hitting American fighter Kevin Vannostrand. The latter is the #1 Glory featherweight and won the first fight between the two with a quickfire KO.

Petchpanomrung and Kevin VanNostrand fight to majority draw at Glory 72 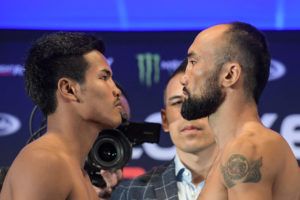 Petchpanomrung, Boynazarov on point ahead of Glory 67 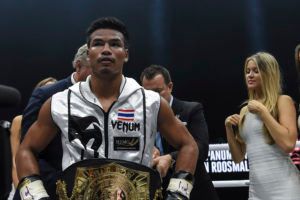