The sixth K-1 World Grand Prix finals take place at the Tokyo Dome tonight. A record breaking crowd of nearly 65,000 fans was in attendance to see Peter Aerts win the tournament for the third time.

The eight finalists all earned their place at the K-1 World Grand Prix Opening round show, at the Osaka Dome back in September. The opening quarter-final match saw South Africa’s Mike Bernardo face Francisco Filho of Brazil.

Both eased into the fight in the opening minute before Bernardo opened up with a hard right and left hook. Filho looked to stick and move and avoid the South African’s power shots and landed with a sharp side kick and follow in low kick.

Bernardo landed a couple of hard knees in the clinch, before opening up with some hard punches. Filho stood his ground briefly and exchanged back in a brief moment of violence.

Filho went back to his cautious approach for the rest of the round, while Bernardo stalked forward looking for any openings to unleash his power shots.

In the second Bernardo kept pushing forward looking to open up with big punches. Filho kept moving and almost landed with a fast spinning back kick.

Bernardo came in with a barrage of knees in the clinch, almost catching Filho in the head. The Brazilian stayed on the back foot, but started to open up with punches briefly towards the end of the round, only to get his head snapped back by a solid jab.

In the final round Bernardo carried on where he left off, stalking forward and looking to open up with heavy punches. A short way into the round he landed with a hard right uppercut and the Brazilian stumbled to the canvas, but it was ruled a slip.

Filho stumbled over a couple of times again, before another heavy uppercut dropped him for a count. Bernardo came in for the kill and Filho stumbled over again under the pressure of the attacks, before a hard overhand right sent Filho face first to the canvas and the referee called off the fight.

Satake looked to stay up on the balls of his feet and avoid staying too close to Aerts. The Japanese fighter came in with a strong body kick and tried to catch him out with a spinning back fist.

Aerts chased Satake across the ring, unloading with hard punches and a big knee. The Dutchman then took the action into the clinch and landed with a heavy knee, dropping his opponent to the canvas in considerable pain.

Satake beat the count, but was soon dropped by another hard knee and this time the referee called off the fight.

A short way into the round Greco exploded to life, attacking Hoost with hard punches, low kicks and body kicks but the defending champion did a good job of soaking up the pressure while jabbing and moving away from the Australian’s attacks.

Greco soon landed a hard body kick and attacked Hoost again with a barrage of hard punches, but most bounced harmlessly off the Dutchman’s gloves.  Greco kept stalking for the rest of the round, but Hoost moved well and landed with a few slick counters.

In the second round Greco pushed forward again while his opponent looked to land sharp jabs and kicks. The Australian opened up with more hard punches but struggled to land anything of note,

The fight moved briefly into the clinch before Greco started to open up again with hard punches and knees. Hoost traded back, but picked up a cut and the fight was paused while he was taken to see the ringside doctor.

The action was allowed to continue, but at the end of the round the doctor checked the cut again and the fight was called off, with Greco the winner by TKO.

Sefo looked to probe Hug’s defences with some punches but didn’t look like he was putting too much power into them. He kept looking to punish the legs of the New Zealander, who tried to counter with a fast spinning back kick near the end of the round.

In the second stanza Hug kept up his assault on Sefo’s legs. The New Zealander opened up with a few sharp punches, but nothing affected the Swiss veteran too much.

Hug caught Sefo with a solid left hook after switching briefly from his southpaw stance and followed in with a hard straight left that buckled his opponent’s knees. He fired in another fast left that found its mark and dropped Sefo for an eight count.

Sefo managed to beat the count, but Hug followed in with a barrage of shots, dropping Sefo again with a hard right hook and this time the referee stopped the fight.

The first semi-final saw Aerts take on Bernardo. It was the sixth fight between them, with both having two stoppage wins each and one win by disqualification for the South African.

Aerts started by using movement and a fast jab to contain the oncoming Bernardo, who came out with heavy punches straight away. The Dutchman landed with some hard low kicks and knees and backed his opponent up with a hard one-two.

Aerts tried to connect with a high kick and followed in with some more hard punches and knees. Bernardo came in with a hard low kick, but the Dutchman countered with a one-two uppercut combination that dropped him for an eight count.

Aerts came in for the kill and a short while after dropped Bernardo again with a heavy overhand right. This time the South African was unable to beat the count with his opponent on course for a historic third K-1 World Grand Prix win.

Next up saw Hug face off against Greco, to see who would face Aerts in the final. The early action saw both feeling their way into the fight and testing each other with feigns.

Hug looked a little tentative at first, but soon drew some gasps from the crowd with an attempted spinning heel kick followed by an axe kick although neither strike did any real damage. Greco came in with a solid knee and the Swiss fighter looked to land a fast spinning back fist.

Hug started to open up with punches and both opened up with some tit for tat attacks up to the bell. In the second Hug again attempted to land with an axe kick at the start of the round.

Both tried to land with back fists before Hug started to concentrate on attacking the legs of Greco. The two heavyweights started to open up and trade more with hard punches and kicks.

Hug started to get on top of the exchanges, but as the bell rang to end the round, connected with a few more shots and Greco reacted with a hard right that dropped him to the canvas but it landed well after the bell.

In the final round Greco came out fast, attacking Hug with fast kicks and punches. The K-1 World Grand Prix 1996 winner moved our of range and started to land with some sharp punches of his own.

Greco landed a fast body kick but it was caught by Hug, who threw him down to the canvas. The Swiss fighter opened up relentlessly with punches now.

The Australian came back with kicks and punches, but Hug was the busier of the two. One of the judges scored the fight a draw but the other two voted in favour of Hug who faces Aerts in the final.

Aerts came straight out with a high kick, but Hug countered with a low kick and both fighters lost their balance. The Dutchman came in with some solid knees in the clinch, before firing in a fast right body kick and punch.

He then switched to a fast left high kick that crashed into Hug’s jaw, knocking him out. Aerts made history again as the first ever three times winner of the K-1 Grand Prix and took home $230,000 USD in the process. 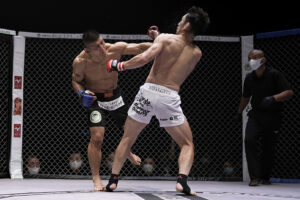