Regian Eersel will be defending his lightweight kickboxing strap tonight. The Dutchman might not be the biggest name on the ONE Championship roster but on the back of a 17 fight winning streak he thinks he should get more credit,

“I feel a little bit that I have the credit that I deserve. But on the other side, not really, but it’s been like that almost my whole career. I think it’s because I let my actions speak in the ring, and outside the ring I’m quite a nice guy.”

Two wins over Nieky Holzken in title fights speak for themselves. While Eersel’s name might not be ringing out as loudly as he would like the 28 year old is supremely confident,

“I feel mentally like I can fight the whole world. Physically, I am in very good shape. I trained very hard for this fight, and you will see it on 3rd December,” he said. There are several veterans on the ONE Championship roster like Holzken, Andy Souwer and John Wayne Parr. But Eersel does not fall into this category yet and feels the world has yet to see him at the peak of his powers,

“I don’t feel like I’ve reached my peak yet. I feel like the best version of myself is still to come out. I’m just 28 years old. I think I have eight or ten years to go, so we will see.”

He faces Islam Murtazaev at ONE: ‘Winter Warriors’. The Dutchman will be wary of his opponent’s spinning strikes,

“He has a lot of Muay Thai fights, and he likes spinning attacks, so we anticipated that in the training a little bit. But we are not focusing too much on the ability of my opponent. We are looking at my abilities and what we can improve.”

“Every opponent has his own good side and bad side, and I think Islam has a dangerous style of fighting. I know he’s a tough opponent,” Eersel said. 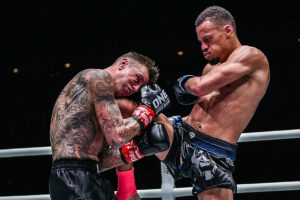 He trains out of the Sityodtong camp in Amsterdam so shouldn’t have any issues with taking on a Muay Thai fighter. At  6′ 2″ Eersel is one of the tallest fighters in the division and thinks his style is unorthodox and unpredictable,

“I think I am better than everybody else because I have an unorthodox style and I have an aggressive style. I punch, kick, and knee from different angles and it surprises my opponents.”

Having been the distance in his last three fights Eersel would like to earn a stoppage tonight. He has scored a few knockdowns but would like nothing more than to win with a knockout,

“A fight is a fight, anything can happen, but I hope I will win by KO.”