Ren Hiramoto scored the split decision over Hiroaki Suzuki at Rizin 36 on Saturday. The featherweight clash took centre stage after former bantamweight champion Kai Asakura was forced to pull out of the main event due to injury.

Hiramoto is a K-1 veteran and transitioned from kickboxing to MMA in 2020 but suffered back-to-back losses against Kyohei Hagiwara and Chihiro Suzuki. Hiroaki Suzuki is 13 years older and a recent convert to the sport having competed in Muay Thai and kickboxing for the majority of his career.

The ONE Championship veteran was coming into the bout a first-round knockout victory against Shoji Maruyama at Rizin Landmark 2 in March. Unsurprisingly the fans in Okinawa were treated to a striking battle from the outset with Hiramoto getting the better of the exchanges. 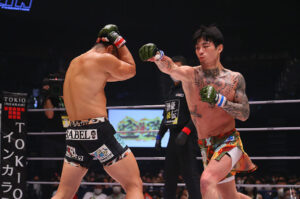 The 24-year-old utilized his jab well and showed great work with punches to the body and hooks on the inside. With Hiramoto getting the upper hand on the feet his opponent began shooting for takedowns and showed superior work on the ground.

It could have potentially swung the tide in his favour as it was a close contest. But in the end the crisper shots from Hiramoto were enough to earn him a split decision win which takes him to 1-2 while his opponent drops to 2-2.

The co-main was decided by another split decision as the reining Deep Jewels atomweight champion Saori Oshima overcame 47-year-old Miyuu Yamamoto. This was her first time competing under the Rizin banner and she left an impression by showcasing a range of weapons including some lively superman punches.

The win takes her record to 9-3. Yamamoto meanwhile slides to 6-7 having now lost three on the bounce, although those other two losses came against Rena Kubota and Ayaka Hamasaki who are also considered to be two of the best in the world in their weight class.