It is five years since Rena Kubota beat Miyuu Yamamoto in Okinawa. Much has changed during that period but the outcome in the rematch was exactly the same although this time the Shoot Boxing veteran won using strikes rather than a submission.

In fact it was a single strike that finished the fight in the second round. Yamamoto shot for a takedown and was greeted with a knee to the head.

The 47 year old was not knocked out instantly but was turtled up and unable to defend herself as Rena launched a non stop flurry of punches to the ear area. The referee stepped in to save her at the 3:35 mark. 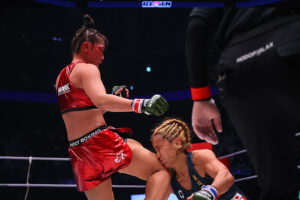 Yamamoto had used her wrestling to good effect. She took Rena down in the opening round but found herself defending an armbar attempt right up until the bell.

She got the fight to the ground almost immediately in the second stanza. Eventually Rena worked her way up but Yamamoto was applying constant pressure.

Rena was backing up but there was nowhere to run. So instead she decided to launch a counter attack and landed the knee that finished the fight. 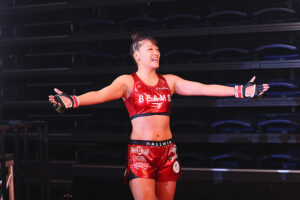 Juri Ohara (29-17) needed just 76 seconds to finish Kohei Tokeshi (6-8). A flurry of punches did the damage in the second round of their catchweight fight.