Rena Kubota will fight Miyuu Yamamoto at Rizin 32 on November 20th. The fight is set for Okinawa and it is a city with special significance for both super atomweights.

They first fought there on a Rizin card in 2016. Yamamoto was making her professional debut while it was Rena’s second fight and she won with an innovative submission.

Rena has not fought at all this year but is excited to be getting back in the Rizin ring,

“It’s been about a year since my last fight but I’ve been training hard and my confidence is growing,” she said. Rena won her first six fights, including the victory over Yamamoto. She reached the final of the Rizin super atomweight Grand Prix in 2017 but was handed her first ever loss by Kanna Asakura.

Asakura remains one of only two fighters to ever beat Rena. The other was Lindsey VanZandt and the Japanese fighter avenged that loss a few months later.

With Seo Hee Ham no longer on the roster and Asakura coming off back to back losses for the first time in her career the super atomweight division has a very different feel to it. Even though Rena has been out of action since 2020 she is riding a three fight winning streak and is right in the title mix.”

The 30 year old feels she is entering the ‘final stretch’ of her career which makes this a very important fight,

“This fight will determine the direction of my final stretch of my career so I plan on a good performance, not giving Miyuu a successful revenge.” With Yamamoto being based locally her opponent is sure to get strong support from the crowd at Okinawa Arena. For Rena this just adds to the feeling that this will be a special occasion and a special fight,

“I feel that this rematch was destined to happen here, in Okinawa where it means so much for both of us.” 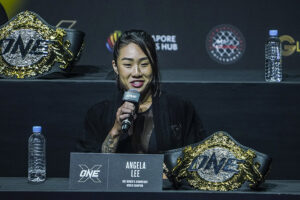