Rika Ishige not feeling the pressure ahead of ONE: ‘Clash of Legends’

Rika Ishige is used to pressure. She made her professional debut on a ONE Championship card at the biggest indoor arena in Thailand and came from behind to win with a first round stoppage that day.

Ishige looked like she didn’t have a care in the world as she danced down the ramp ahead of her first professional fight. She came into the contest with very little experience but showed the kind of tenacity you can’t teach to weather an early storm and win.

Four of her six fights have taken place in the Impact Arena and it is a venue that will always have special significance for Ishige,

“I love competing in Bangkok. Hearing the Thai people cheer for me really hypes me up,” she said. However Ishige, who faces Nou Srey Pov at ONE: ‘Clash of Legends’ next week, also feels the burden of expectation whenever she fights in Bangkok,

“There is pressure too in being a hometown athlete. I don’t want to disappoint my fans (but) it is my opinion that it is mind over matter and I can handle it.”

When you are asked to make your pro debut on such a major stage the learning process needs to be quick. There is no margin for error and Ishige has left the bright lights and bad air in Bangkok behind to sharpen her skills at Tiger Muay Thai in Phuket.

“(Training) is six days a week and includes technique, strength and conditioning and sparring. I do mental training as well,” she said. 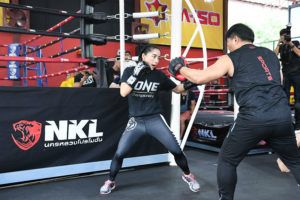 She knows what it takes to make rapid improvements in a short space of time and that process is well underway for Ishige ahead of ONE: ‘Clash of Legends’,

“For this match I’m working on sharpening all my skills (like) striking, wrestling, and groundwork. Training is going very well, I came down to Phuket to take my camp to the next level and escape the pollution in Bangkok,” she said.

Her opponent comes from a Kun Khmer background and will be making her pro debut. That might suggest Nou Srey Pov isn’t much of a grappler but Ishige says she is taking nothing for granted as she prepares to face the Cambodian,

“I know that my opponent’s strength will be her striking and that she won’t be as good on the ground but I never underestimate (an) opponent.” 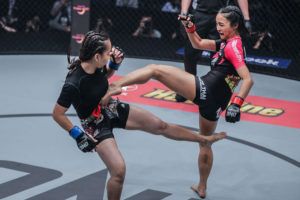 Ishige has suffered setbacks during her ONE Championship career. She’s been beaten twice, and one of those losses was handed to her at the Impact Arena when the Thai atomweight put in a lackluster performance en route to a decision defeat.

That was the only time Ishige has ever been the distance. She’s at her best when swarming all over opponents and scrambling for submissions and this will be the strategy next Friday,

“I’m not going to let her stand. My plan is to be smart on my feet and to take her to the ground quickly.”