Thai fighters talk ahead of ONE: ‘Clash of Legends’

There was a star studded line up on display at the renowned PK Saenchai Muay Thai gym in Bangkok yesterday. The fighters had gathered for an open workout ahead of ONE: ‘Clash of Legends’ which is set for the Impact Arena on February 16th.

Headlining the card is Thai superstar and multiple stadium champion Nong-O Gaiyanghadao, who faces Chinese warrior Han Zi Hao for the inaugural ONE bantamweight Muay Thai title. Nong-O knows it won’t be an easy task, but is more than ready for the challenge as he attempts to take the title in front of his hometown crowd,

“I have been training very hard for this fight as it is for the world title and a very important fight for me and I am determined to take the belt. I have watched some of my opponent’s fights online and he is a strong fighter, especially with his hands. He is tall, so I will work on using my kicks more as they will be longer than his punches, I have to make sure I hit the target hard, with every shot. I cannot say for sure how the fight will turn out, we will have to see on the night, but I guarantee it will be a very entertaining fight,” Nong-O said. 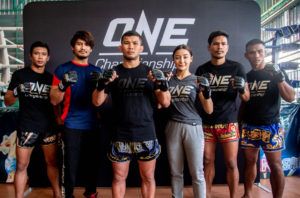 Two out of two

Making his return to the ONE Super Series, Chamuaktong Fightermuaythai faces English star Charlie Peters. Chamuaktong put on a punishing Muay Thai clinic to beat Brown Pinas on his debut on ONE: ‘Reign of Kings’ and intends to make it two out of two in his match with Peters,

“I have seen him fight before, when he fought my stablemate Saenchai PKSaenchaigym. He is a good fighter but, I am very confident I can beat him. My favourite weapon is my knees, which are not so important under ONE scoring, so I have been working hard on my elbows to get the win,” Chamuaktong said.

Superlek Kiatmoo9 makes his ONE debut against the tough, dangerous Cambodian warrior Lao Chetra who comes with a formidable reputation as the number one fighter in his homeland,

“I have seen him fight and he is very strong and aggressive. I am more experienced though and have trained very hard so I can put on a show for the Thai fans. I have been working on my elbows especially to slow him down,” Superlek said. Another Thai superstar making his ONE debut is former Sportswriters of Thailand ‘Fighter of the Year’ award winner and multiple time stadium champion Kongsak PKSaenchaigym. At 29 years of age Kongsak is moving towards the twilight stages of his career and feels ONE Championship is the place to probably finish his fighting days,

“I am really happy to get the opportunity to fight for ONE, it is the show every Thai fighter is looking to fight on now. I have signed a contract for two years and it will probably be my last two years competing in the sport, so I am very determined to give it my best,” Kongsak said.

Having previously experienced the three round format in Thailand, Kongsak is confident he knows how to take each fight and is not too concerned about using MMA style gloves instead of the usual regular boxing gloves,

“I fought a few times under the three round format in Thailand using the bound fist or Kard Chuek rules. The three round fights can be a little harder to pace as they start fast straight away and you have more time to settle into the fight in a five round match. I fought using the bound fist before so the gloves don’t worry me too much, but you have to be very aware defensively and cannot afford to lose your concentration for a second.”

Kongsak’s opponent Alaverdi Ramazanov already has a victory over his countryman Petchmorakot Wor Sangprapai at ONE: ‘Conquest of Champions’, so the Buriram native knows he won’t be in for an easy fight.

“He is tall and has good boxing, his kicks don’t look so strong though and I will be using my left kick throughout to try and win the fight. I am confident I will get the win,” he said. Wiratchai faces South Korea’s Tae Kyun Kim and is looking forward to showcasing his skills in front of the home crowd.

“I have fought all over Asia, but it’s always special to put on a show in front of your own countrymen and I am determined to show I am still the best,” he said.

Ishige takes on Cambodian warrior Nou Srey Pov in an atomweight match up, but already has one eye on Angela Lee’s world title.

“I am very focused for this fight and have learned a lot this year and I am ready to show this to the world. There is a lot of strong talent at my weight and I am determined to beat them all on route to the title,” she said.