Rin Nakai is one of eight fighters confirmed for the Deep-Jewels flyweight Grand Prix. The quarter finals will take place on March 12th at the New Pier Hall.

Nakai (22-2-1) is a Rizin and UFC veteran. The 35 year old is riding a six fight winning streak but has not competed in MMA at all in the past two years.

Joining her in the tournament will be Shizuka Sugiyama (20-6-1). The 34 year old is a Deep-Jewels veteran and has won her last four fights.

The first round is set for Deep-Jewels 36. It will be the promotion’s first event of 2022 with the matchups set to be revealed at a later date. 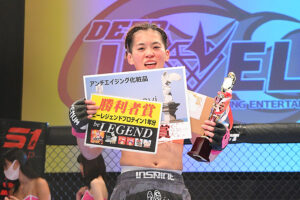