Ritu Phogat faces Itsuki Hirata in the ONE Championship atomweight Grand Prix semi final next week. There is no question that this will be the biggest fight of the Indian’s career and she is in confident mood.

Phogat came from behind to beat Meng Bo in the quarter final and feels full of confidence heading into ONE: ‘NextGen’,

“I feel great after reaching the Grand Prix semifinals, and the victory against Meng has boosted my confidence too. This self-confidence will help in the upcoming fights.” 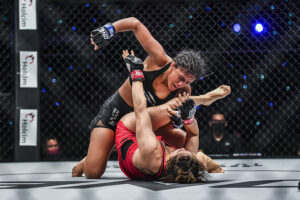 Her opponent is a judo expert but Phogat is confident that her wrestling will be too much for Hirata,

“You attack the legs more in wrestling, while in Judo, the upper body is targeted. I will be able to counter Hirata’s upper body attacks with different kinds of strikes. So, my wrestling will prevail over her judo skills,” she said.

She was able to outwrestle Bo in rounds two and three having nearly been finished in the first five minutes. But Phogat acknowledges that it might be tougher to do this to Hirata,

“She’s strong and she has good wrestling skills, so getting takedowns against her won’t be easy. It’s tougher to take down a grappler than a striker, so it won’t be easy to beat her.” 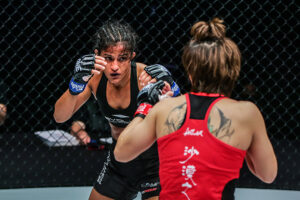 But Phogat believes her opponent is one dimensional. The Indian thinks Hirata brings nothing to the table except judo,

“She uses her upper body strength for the takedown and brings her opponents to the ground. She also has just one skill, but my game is better than hers.”

Having been emphatically beaten in the striking exchanges last time out Phogat has a point to prove next week. She wants to show that she is a well rounded mixed martial artist,

“I don’t think anyone in the atomweight category can match my wrestling skills (but) if I get an opportunity, I will try to finish the fight with a knockout,” she said.

She thinks that winning the fight by KO would send the perfect message to the opponent she faces in the final,

“I want to change people’s opinion that Ritu Phogat is only good at wrestling. I would like to win this fight in a different way so that my opponent in the final knows that I can win in different ways.”

She frequently shares footage of her training at Evolve MMA on social media. Having made her pro debut less than two years ago Phogat is still a relative newcomer and believes she is improving rapidly from fight to fight,

“It would be a mistake to count me out because you are going to see a different Ritu Phogat in every match.”

With a huge fan base in India she is one of the most popular fighters on the ONE Championship roster. She thinks the best way to repay the loyalty of her supporters would be by winning the Grand Prix and then beating Angela Lee to become the champion,

“I am here only because of the support of my fans. Please keep showering me with your love and support (and) I will soon win the silver and golden belts.”