Meng Bo will be facing Ritu Phogat this Friday at ONE: ‘Empower’. The Chinese fighter is a veteran of 22 fights and is much more experienced than the Indian, at least in MMA terms.

Bo knows it too. She believes Phogat is a bit of a newbie and is not impressed by what she has seen of her opponent’s striking,

“She has not been fighting MMA very long compared to me. She has a lot to improve when it comes to striking.”

It sounds like Bo is already looking past Phogat. She is very confident of winning the tournament and is expecting to meet Itsuki Hirata in the semi final,

“I have 100% confidence of winning this Grand Prix. My ultimate goal is not just to win the Grand Prix but to beat Angela Lee and get the belt. Itsuki is well rounded and a strong opponent, I want to face her,” she said. 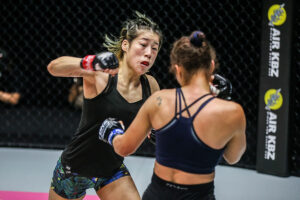 Bo clearly does not feel that Phogat is well rounded. In fact the identity of her opponent has changed no fewer than three times which could well be some sort of record.

First she was scheduled to face Phogat, then Julie Mezabarba, then Grace Cleveland before the Indian was reinstated in the tournament. But Bo just doesn’t sound bothered,

“I don’t care much about whether it is Ritu or another opponent. I can fight with anyone,” she said. 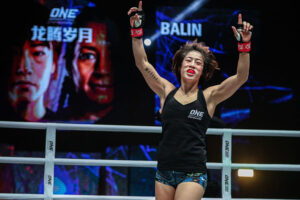 The 25 year old is so confident of beating Phogat that she considers it a matter of when, not if, she makes it to the next stage of the tournament,

“Once I defeat Ritu in the Grand Prix, then I can continue the championship journey in the following matches.”

Her confidence is understandable, Bo is riding a seven fight winning streak. The majority of her 17 wins have come inside the distance and she is planning on knocking out Phogat this Friday,