The new World Siam Stadium in Bangkok played host to Road to ONE 5 today. The card consisted exclusively of Muay Thai fights and there was some controversy surrounding the main event.

Petchpangan Teeded99 and Wanchana Nor Narisson were facing off for the third time. The latter won their first fight at Rangsit while the former prevailed when they met in a rematch at Rajadamnern last month.

There wasn’t too much between them in the opening two rounds of this lightweight fight, as Petchpangan pushed forward looking to clinch and Wanchana looked to use his superior fight IQ to smother the attacks of the reigning Rajadamnern 126lbs champion and turn him off balance when he could. The controversy arose in the third round after a knee to the groin from Wanchana saw Petchpangan double over in agony. The referee missed the low blow and gave him an eight count.

This caused a problem with Petchpangan’s corner at the end of the round. Eventually it was decided that the only way to solve the issue was to declare the fight a no contest. The co-main event at 150lbs saw Yodsaenchai NayokAThasala face Roylan Warriormuaythai. The reigning Thailand welterweight champion came into the fight on the back of two straight high kick KO wins and the talk before the match was would he be able to do it again against Roylan.

Roylan was cagey in the first two rounds, but also looked dangerous whenever he opened up with punches. Yodsaenchai opened up with a few fast, rising elbows through the guard but never got the opportunity to test his opponent’s defences with his trademark high kick.

In the third Roylan came to life, marching forward into the clinch. This gave Yodsaenchai the opportunity he needed and he connected with another fast, rising elbow that instantly finished the fight. 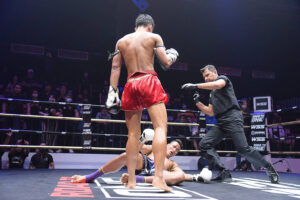 In the second fight of the card Nongchamp Suanaharnpikmai scored a knockdown in the second round of his match with Kongburapha Thipthaamai, dropping him with some vicious low kicks.

Kongburapha showed a lot of heart to come back in the later rounds, managing to stun Nongchamp a few times with punches, but he didn’t have enough energy to finish him off and Nongchamp took the decision. 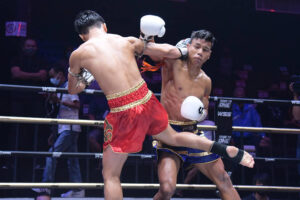 The opening fight of the show saw Kaensak Sor Tienpho face Patakngern Pahkbangkhaakao. It looked a tough task for Kaensak after he took an eight count in round two from a fast high kick from Patakngern.

Kaensak never gave up though and kept pushing forward, looking to wear down Patakngern in the clinch. The fight changed dramatically in the final round when after a brief clinch exchange Patakngern collapsed in pain on the ropes with a dislocated shoulder.

The referee gave Patakngern an eight count and allowed the fight to go on, but almost immediately called off the fight as he was clearly unable to continue. 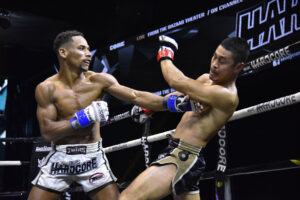 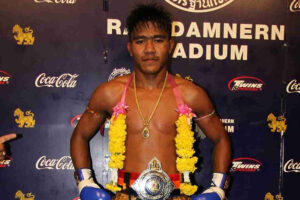 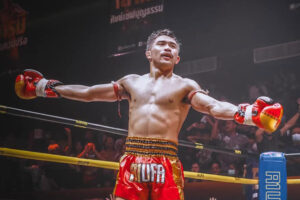