The event is set for the Axiata Arena in Kuala Lumpur and will be headlined by this title fight. Chinese teenager Peimian has been rewarded for winning two ONE Championship fights out of two in 2022 with a shot at the belt.

At ONE: ‘Lights Out’ in March he stopped Josh Tonna in the second round with body shots. In July he earned a decision win over Aslanbek Zikreev with both fights taking place in the Singapore Indoor Stadium.

While Peimian has ben busy competing in kickboxing bouts for ONE Championship this year his opponent appears to have been more focused on boxing. Di Bella has fought twice in his home of Montreal this year, winning both bouts.

Di Bella has fought for Glory in the past and won the ISKA featherweight title in 2018. He will be making his ONE Championship debut in Malaysia.

The c0-main event will also be a kickboxing fight, with just two MMA bouts on the ONE 162 card. Islam Murtazaev takes on Nieky Holzken in a match that had originally been scheduled for March.

In the strawweight division former champion Alex Silva (12-7) takes on Gustavo Balart (10-4). The Cuban is the smallest man on the roster but is coming off to very entertaining decision wins.

Meanwhile the experienced Reece McLaren (15-8) will take on Windson Ramos (5-1) in the flyweight division. Both men are BJJ black belts but the Brazilian is a no gi grappling world champion.

ONE on Prime Video 3 is set for the Axiata Arena the following day. It ill take place on Saturday morning local time and be headlined by an all Brazilian flyweight title fight between John Lineker and Fabricio Andrade. 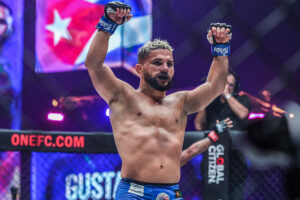