Rodtang Jitmuangnon and Gaonar PKSaenchaigym met in a rematch tonight. The event was held to raise money for charity and had a limited number of fans in attendance at the newly opened World Siam Stadium in Bangkok.

Rodtang started the fight as a southpaw in an attempt to stop Gaonar working his trademark left kick so easily and soon started to pressure Gaonar with hard low kicks and punches. Gaonar started the slower of the two, looking to soak up Rodtang’s pressure and counter with the left kick and elbows.

In the third Rodtang carried on pressuring Gaonar and landed with some hard low kicks to his front leg. Gaonar fired in some fast body kicks, but Rodtang managed to catch a few and counter with more low kicks. 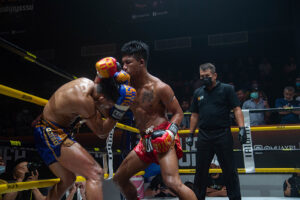 Near the end of the round Gaonar connected with a hard elbow and Rodtang stumbled off balance to the canvas, but jumped straight back up to no count. Rodtang pushed forward again in the fourth and kept trying to call Gaonar into the centre of the ring, inviting him to trade.

Gaonar kept sitting back though and looking for the counter shot. Gaonar got through with some sharp kicks, but Rodtang kept sinking in hard punches and near the end of the round, spun Gaonar around with a hard left hook, finishing the round ahead.

Gaonar pushed forward now in the last round, attacking Rodtang with hard kicks and elbows, but Rodtang showed he wasn’t just a walk forward brawler, evading a lot of his opponent’s shots and firing back with counters.

Halfway through the round Gaonar conceded defeat and Rodtang took the decision win at the bell. 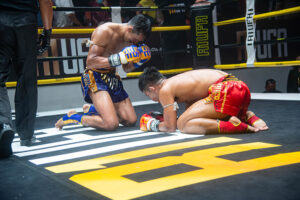 Sao-Ek pushed forward in the third and tried to pressure Ronachai with sharp kicks and knees. Ronachai threw less shots, but looked considerably bigger than Sao-Ek and every knee and kick looked hard.

Ronachai had been fighting around 125lbs and struggled a little to get down to 122lbs for this fight. Sao-Ek’s corner would have been hoping he would fade due to the weight cut, but he had clearly recovered well and cruised to a decision win. The show got underway with a fight between two of Thailand’s upcoming stars Yodpetchek UFABoomdeksian and Baramee Isarnkuanpring. Yodpetchek showed skills and ring craft way beyond his years to take a comfortable points win.

There was a typical Thai style feeling out process early on, but Suersat soon started to pressure Sao-Thor, attacking him with hard low kicks and knees and elbows. Sao-Thor looked to soak up the attacks and counter back, but looked like he could become overwhelmed at times.

In the third Sao-Thor pushed forward more and opened up with hard knees to bring the fight back close. The fight went back and forth with both opening up with hard shots, but towards the end of the fourth Sao-Ek’s gum shield came flying out, seen as a sign of tiredness this put him behind and Suersat was able to control the fight comfortably until the final bell where he took the win. 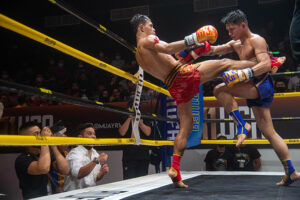 Next up saw Prajanchai PKSaenchaimuaythai gym face Kompetch Sitsarawatsua. This was another replacement after Prajanchai ’s original opponent Yothin FAGroup was forced to pull out.

In round three Kompetch upped the pressure, but again Prajanchai looked a little too slick with his movement and landed with some explosive kicks. Prajanchai recently won the WBA Asia South boxing title and there is a lot of talk he is going to make a strong run at a boxing world title soon and it was easy to see why, as he showed some crisp boxing as well to finish the round looking comfortable. 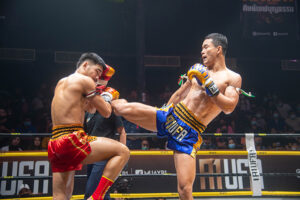 Kompetch refused to give up the cause though and attacked Prajanchai relentlessly in the fourth, not giving him any time to breath and attacking with more strong kicks and punches. Prajanchai tried to come back with more slick counters, but Kompetch was giving him very little time.

Prajanchai landed a few solid kicks near the end of the round, but Kompetch spun him off balance from the clinch just before the bell. In the final round Kompetch pushed forward at first, before both fighters stood off each other, looking to take their chances with the judges.

At the final bell Kompetch was awarded the decision win.