Filipino fighter Rolando Dy considers himself as a man on a mission and will take on any challenge to be able to return to the UFC.

After losing three of his four Octagon outings from 2017 to 2018, the 28-year-old resident of Cavite, Philippines received the dreaded pink slip from the Las Vegas based promotion.

Dy admitted that his release from the UFC was a bitter pill to swallow, causing him to entertain the idea of hanging up the gloves for good.

“I was sad, really sad. I even thought of retiring from the sport. It was my dream to be in the UFC, but I blew it,” he said. 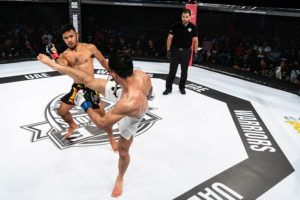 He attributed his sudden exit from the organization to several factors, including the rockstar lifestyle that he embraced since he became part of the talent-filled UFC roster.

“At that time, the focus was gone. I was partying a lot, which I did not do when I was still in both regional and local promotions. I forgot that I am a professional MMA athlete. It did make me arrogant and swell-headed. It cost me everything,”

The issues that Dy ran into went well beyond his fighting career,

“It affected my life outside the cage. My personal life went really bad. I had relationship problems, and I had to deal with injuries. Honestly, it is one of the most heartbreaking phases of my life,” Dy added.

As he was about to throw in the towel, Dy had a change of heart when he received an offer to face Jordanâ€™s Izzeddine Al Derbani at Abu Dhabi Warriors 5 in January.

“They gave me an offer to fight again. I thought long and hard about it. I just gave it a try. When I was training for that specific fight, I found out that my warrior spirit is still within me,” 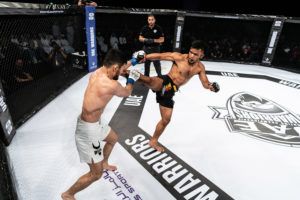 In his first bout since being cut by the UFC, Dy was nothing short of spectacular as he steamrolled Al Derbani to claim a first-round technical knockout victory.

“That fight was an eye-opener. It reminded me why I love this sport. It brought back my focus and discipline in training. It also made me realize why I got released from the UFC. In this field, I canâ€™t play on the highest stage of MMA with half commitment,”

His conquest of Al Derbani was followed up with a stoppage win over Pakistanâ€™s Mehmosh Raza at Brave 22 in the Philippines.

Dy sent Razaâ€™s mouthguard flying with a left hook-right straight combination in the first round, registering the fourth knockout win of his career.

After winning two consecutive matches in emphatic fashion, Dy was given a title shot by Abu Dhabi Warriors, now rebranded as UAE Warriors, under the Palm Sports management. 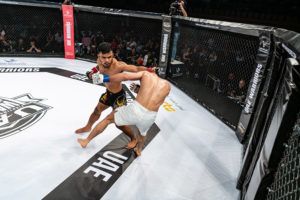 Vying for the inaugural featherweight championship at UAE Warriors 6 last May, Dy did not disappoint as he outworked Kazakhstanâ€™s Erzhan Estanov over the course of five rounds to score a unanimous decision victory and claim the gold-plated strap.

With his current success outside the UFC, Dy believes that he is able to put himself back on his former employerâ€™s radar.

“I am expecting a call already, to be honest. I am hoping for it,” he said.

Dy cited fellow PXC alumnus Louis Smolka as an example. The latter had to win three matches in the local circuit before being re-signed by the UFC in late 2018.

“Louis Smolka won three fights outside the UFC. He even won a title in one promotion. Itâ€™s the same with my case, so I believe itâ€™s going to happen. It is inevitable.” Although he was unable to reach even the top 15 of the UFC featherweight rankings in his initial run, Dy is confident that he will climb to greater heights if he is given another chance to set foot inside the octagon.

“I love fighting. Deep within me I know I can do it (and) if the UFC re-signs me, I will prove it. No one will stop me from creating my legacy in MMA. I am not done yet.”