The Professional Fight League drew the curtains on another regular season on Thursday night in Atlantic City with a heavyweight tilt between Jared Rosholt and Satoshi Ishii.

With a playoff spot on the line to chase after the $1 million cash prize, Rosholt earned a unanimous decision over Ishii using the bare essentials.

Both traded leg kicks during a feeling out process at the start of the first round. Rosholt did an excellent job ducking under punches and clinching with Ishii to connect with knees to the bread basket and short uppercuts to the chin. 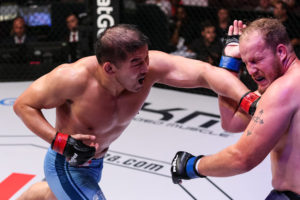 With about a minute left, the American dragged his opponent to the ground and took his back. Nothing came of that position but he clearly took the round by being much more active.

The middle frame was limited in action with both fighters missing most of their strikes on the feet and spending extended periods in the clinch. Rosholt did obtain two takedowns while Ishii executed a trip yet not much damage was done.

Going into the final round, Ishii looked fatigued and Rosholt seemed to sense that and used the clinch to tie the Japanese heavyweight up and avoid his haymakers. In that locked up position, Rosholt landed peppering punches and didn’t receive any serious shots in return. With the narrow decision victory, Rosholt (18-7) scores the three points needed to snatch up the #7 slot meanwhile Ishii (22-9-1) settles in at #8. In the quarter finals of the playoff brackets, Rosholt will take on Mo De’Reese while Ishii faces Denis Goltsov.

The quarter finals of the PFL heavyweight tournament will commence on October 31 at the Mandalay Bay Events Center in Las Vegas. $1 million USD is on the line for the winner.