Seika Izawa’s stock continues to rise after a very impressive submission win over Laura Fontoura in the main event of Rizin 37. She had to undergo some real adversity before finishing the previously undefeated Brazilian late in the first round to secure a spot in the semi finals of the super atomweight Grand Prix.

The 24 year old had been the distance five times in her previous seven fights. In the buildup Izawa talked about the importance of finishing fights if she wanted to become a fan favourite with Rizin and here she did exactly that.

In the opening seconds Fontoura jumped guard and had Izawa locked in a tight guillotine. There was no escape for the Deep strawweight champion who was careful to keep her arms clasped close together to avoid getting caught in an armbar. 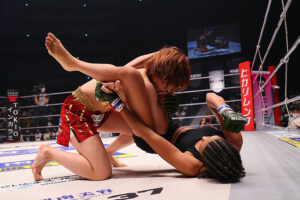 Fontoura was in complete control but couldn’t quite do enough to finish the fight. The tide turned in dramatic fashion when Izawa finally broke free with less than a minute remaining in the round.

She mounted Fontoura following a scramble but wasted no time in locking in a guillotine and rolling onto her back. The Brazilian suddenly found herself trapped in a submission and this time the tap did come.

The finish came at the 3:47 mark and afterwards Izawa was overcome with emotion. She remains undefeated and moves up to 7-0 while Fontoura drops to 7-1 after tasting defeat for the first time in her career. 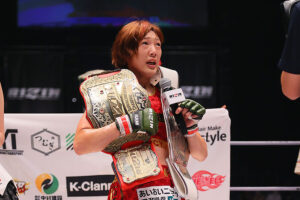 In the co-main event Ayaka Hamasaki booked her super atomweight Grand Prix semi final spot with a dominant decision win over Jessica Aguilar. This is a fight that was supposed to take place 11 years ago but was cancelled due to the tsunami.

How it would have played out back then we will never know. But Hamasaki dominated Aguilar from start to finish here, taking her down repeatedly and scoring with some solid punches in the standup exchanges to give the judges an easy decision.

With the win she improves to 24-5 and secures a spot in the semi finals. Aguilar drops to 20-10 and this was a fourth straight loss for the 40 year old who appears to be coming towards the end of her career. 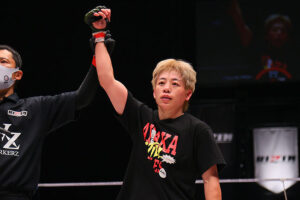 The other semi finalists will be Rena Kubota (13-4) and Park Si Won (8-4). They both scored decision wins, the latter at the expense of Anastasiya Svetkivska (2-1) and the former with a win over Kanna Asakura (19-7).