Sergio Pettis scored a stunning spinning back fist knockout against Kyoji Horiguchi at Bellator 272. The Japanese challenger was finished in the fourth round of a fight he appeared to be wining comfortably.

Returning to the Bellator cage for the first time since 2019, Horiguchi had won 14 of his previous 15 fights and dominated Pettis for the vast majority of the first four rounds.

Pettis came into the bout having won his last four in a row, and knew he needed something spectacular in the fourth having lost the first three rounds. He certainly produced the goods, flatlining Horiguchi with a spinning back first.

To say it was against the run of play would be an understatement. Horiguchi set his stall out early with an elusive, loose style as he picked his shots from the outside.

Pettis landed with a counter right hand, but the Japanese fighter was connecting with greater volume and attacking the champion’s lead leg with low kicks. Horiguchi completed a takedown as the American fired off some up kicks.

When the pair returned to the centre the former Rizin bantamweight champion landed with a couple of clean spinning back kicks and a big right hand. Pettis unloaded with a combination and connected with the left hand. The champ was keeping a high guard and staying composed but not throwing enough.

By contrast, Horiguchi was staying busy and planted a one-two, then a teep at the end of a round in which Pettis had found a home for just three of his strikes. Horiguchi switched to southpaw at the start of the second and used the low kick to throw Pettis off balance.

The ATT man then level changed and scored the takedown. This time the up kicks from Pettis worked brilliantly as he cut Horiguchi below the eye and sought to lock in an omoplata. 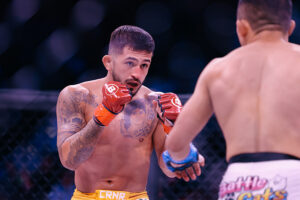 But Horiguchi freed himself and then resumed cracking Pettis with the right hand. In the third round the challenger went back to attacking the lead leg.

Another right hand landed before the spinning back kick was once more buried in Pettis’s belly. Horiguchi then landed his third takedown and appeared to be on his way to a convincing win on the judge’s scorecards.

Pettis defended the takedown at the start of the fourth stanza. His coaches had demanded more volume during the break as he looked to open up with his hands.

???? @SergioPettis turns the tide with a spinning back fist KO out of NOWHERE!

Horiguchi then ran through Pettis and landed in top position. When they got back up the Japanese fighter hit Pettis with the overhand right and showed some sharp footwork to evade the counter.

Pettis scored with the jab then caught Horiguchi with the left. The Milwaukee native then cut loose with some wild swings but was clearly looking to let his hands go.

He buried a lovely left-hand hook to the body. Then came the finish. Horiguchi moved in. Pettis missed with the head kick but immediately followed up with the spinning back fist.

The shot appeared to come out of nowhere as Horiguchi was knocked out cold. This was only the second time the former champion had suffered a knockout and the first time Pettis had delivered one since 2013.

It was a remarkable ending to the fight and a massive feather in the cap for Pettis as he extends his record to 22-5 and retains his bantamweight belt. Horiguchi slips to 29-4.