The moment Shinechagtga Zoltsetseg discovered he had an aptitude for fighting is not one the Mongolian remembers fondly. He was being bullied at school and decided one day that enough was enough,

“I acquired the fighting skills out of necessity, to protect myself. You learn to look after yourself when growing up as an orphan in a rough neighborhood because no one else does.”

Zoltsetseg’s mother and father were both killed in a car crash when he was very young. Growing up in a rough part of Ulaanbaatar without parental support was tough and he found himself fighting on a regular basis,

“I can’t stand it when someone bullies me or bullies the weak. These are the main reasons why I got into so many street fights as a teenager, (but) I learned that I was better than most of the kids at fighting which boosted my confidence.” Zoltsetseg is a veteran of five ONE Warrior Series fights and has won four of them. Anyone who has seen his bouts knows he likes to go for broke right from the bell, eschewing a patient or tactical approach.

This style could quickly establish him as a fan favourite and the 26 year old says he remains a street fighter at heart,

“In a street fight you don’t just use your hands; you kick, elbow, knee and even headbutt to win. I was good at it (so) it was only natural for me to want a career in mixed martial arts.”

He lived with an uncle in Ulaanbaatar but times were tough and Zoltsetseg credits his upbringing with giving him some of the physical tools required to succeed in MMA,

“People talk about my grip strength and punching power. I think it has something to do with the way I spent my childhood. I used to do a lot of physical labor.” Initially his uncle brought him to a boxing gym and Zoltsetseg’s aptitude for the sport was apparent straightaway. He made the national team but yearned to use more than just his fists,

In 2017 a reality TV show was launched in Mongolia based on The Ultimate Fighter. Zoltsetseg entered and emerged as the featherweight champion.

The following year a contract offer from ONE Warrior Series arrived. The rest is history and he is set to make his ONE Championship debut in Bangkok this Friday.

The Mongolian faces Ma Jia Wen in a featherweight fight at ONE: ‘A New Tomorrow’. It is the biggest fight of his career but Zoltsetseg says his confidence is sky high after fighting five times in Singapore,

“I never doubted my abilities before, but this journey helped me reach a whole new level of confidence. I proved myself on a global stage, which was my dream and was a promise I made to myself. It was a life-changing experience, for sure.”

Although Wen has been away from competitive action since 2018 he comes into this contest on the back of a four fight winning streak. A win would instantly establish Zoltsetseg as a contender in the featherweight division and he hopes this will be the start of a long career with ONE Championship,

“I know I have a long way to go. But my ultimate goal in mixed martial arts is to reach the highest level and stay there for as long as possible.” 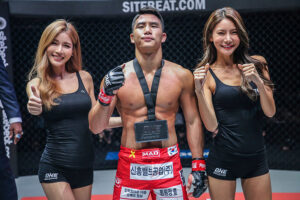 Shuya Kamikubo faces Mitchell Chamale at ONE on TNT II