Shinya Aoki was expecting to fight Sage Northcutt at ONE on TNT Part IV this week. Instead he finds himself facing Eduard Folayang in a trilogy match but the Japanese veteran is taking it all in his stride,

“Even though there was a change of opponent I have been training throughout my life, training daily so there is no effect,” he said.

Shinya Aoki turns 38 next month. He doesn’t need reminding about his age, in fact the two time ONE Championship lightweight title holder brings it up constantly and has even taking to wearing a t-shirt emblazoned with the phrase ‘age is just a number’. He was asked about his longevity and Aoki puts it down to tried and trusted methods,

“It’s not a secret. I practice very day, eat good food and sleep well. Just the basic, things that you have to do in life.”

In the monosyllabic style which is customary for Aoki he fended off a series of questions at the media day. Northcutt is suffering from the lingering effects of Covid-19 and the former Dream champion is open to fighting the UFC veteran in the future,

“Of course I want to compete with Sage Northcutt but I hope he gets healthy again and gets back to a good condition.” He was also asked about the possibility of rematching Christian Lee, the reigning lightweight champion, or fighting Folayang or Eddie Alvarez for the third time. Aoki wasn’t particularly forthcoming on either topic but at least took the time to explain why,

He was more effusive in his praise for Lee who beat him at ONE: ‘Enter the Dragon’ in 2019,

“Christian Lee is really young, I see a lot of improvement. I knew he would get better and stronger and he did.”

Aoki has won three fights in a row and is currently #4 in the lightweight rankings. He could potentially secure a title shot with a victory this week but it doesn’t sound like he is losing any sleep worrying about this,

“I am not looking at Christian’s belt, I just want to continuously fight and enjoy martial arts.” He has already faced Folayang twice and they share a victory each. The Filipino won the first fight by third round KO but Aoki needed less than three minutes to submit him in the rematch.

It means he will be facing a familiar figure at the Singapore Indoor Stadium next week but Aoki does not have any preconceived notions about how the fight will play out,

“I feel that Eduard Folayang is one of the best opponents I have faced but the situation is different, we are both different people. The first match and second match were totally different (s0) you never know what is gong to happen.”

Aoki batted aside questions about whether Folayang was reaching the age of retirement but he does feel that both will have improved since the last fight,

“We are both older but we both have more experience than before so it will be a tough match.” 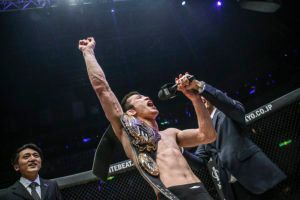 Of Aoki’s 15 ONE Championship fights seven have had a title on the line. However he was adamant that there doesn’t need to be silverware in the line for him to take a fight seriously,

“I’m fighting because I love the sport so even though there’s no belt it doesn’t matter.”

Aoki has always been a man of few words. What he is very good at is submitting opponents, the 36 year old has done it 29 times and he will going out all to claim that 30th scalp at the expense of a familiar foe this week.