Fighters have been hit harder than most by the coronavirus, or Covid-19 pandemic. It is an industry in which you don’t get paid if you don’t compete, and right now there are no competitions.

Teaching classes is an alternative source of income. But with gyms all over Asia closed that stream of revenue has stopped flowing, too.

Shoko Sato can at least console himself with the knowledge that he made the very most of his opportunities prior to the shutdown. The 32 year old fought four times in eight months after signing for ONE Championship early last year.

He wasn’t planning to take a rest but says being forced to do so does have its benefits,

“My condition is the best it has ever been because I don’t have fatigue and injuries. I’ve become more conscious about my body.” 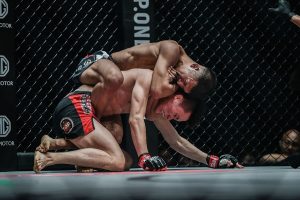 Sato thinks the benefit of the break will be psychological as well as physical,

“I have had the chance to review and improve my training menus. It might sound abstract, but I have started to think more about improving the quality of each session. I always try to think about the goal of each session and reflect (on) the outcome every time.”

When you are fighting every month there is precious little time to pause and reflect on whether time and energy are being used efficiently. But both are in short supply for an active fighter and Sato sees himself taking a more economical approach to future fights,

“Sometimes it is important to push myself even though I am tired but I also think it is good to practice under the best physical condition.”

In fact Sato says the lessons he is learning go well beyond the gym and the cage,

“This situation gave me a good opportunity to rethink my life, the world, the country, and the community where I live. I can be a little more positive in thinking like this. Since it is becoming clearer what I really need and what is important, I can live in a more intense way after the crisis is over.”

Having won six fights in a row Sato is entitled to consider himself the number one contender in the bantamweight division. The current champion made his name in Japan and the former Shooto 135lbs champion admits a fight with Bibiano Fernandes is very much on his mind,

“He was competing in Japanese promotions when I started martial arts so I cannot help but be aware of him. I really want to compete against him (and) I am so interested in experiencing what a match would be like with him.” 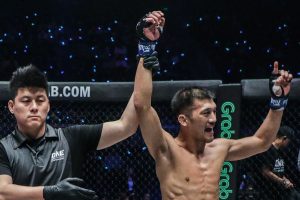 Sato has a background in Karate and he has been thinking about how a fight with Fernandes might play out,

Japan has experienced more than its fair share of typhoons, earthquakes and tsunamis. It gives people there a slightly different perspective on what constitutes a crisis.

Sato acknowledges that the current situation is far from ideal. But he is aware that it could be much worse and is determined to remain upbeat until normality resumes and he can compete again,

“Unlike earthquakes or natural disasters we can use lifelines such as water, gas and electricity. Although we need to stay at home, we can do a lot of things. We should not just be sad, but instead be positive.”