Ryo Okada’s first defense of the Shooto Pacific Rim bantamweight championship against compatriot Tatsuya Ando promised to be a galvanizing encounter on paper as it pitted two of Japan’s up-and-coming fighters from a division that houses a deep pool of talent.

Okada and Ando faced each other in the main event of Shooto 30th Anniversary Tour 7th Round, which took place at the iconic Korakuen Hall in Tokyo Japan last Sunday.

The bout lived up to the expectation of an action-packed affair, but neither of the two fighters walked out with their hand raised in victory as it ended in a split draw with the scores of 29-27, 27-29 and 28-28.

Okada and Ando figured in an intense war of attrition for three whole rounds. It was an incredible performance from the two promising athletes as they both showcased their full repertoire of skills. Although both men possess respected grappling pedigrees, the two stood toe-to-toe at the center of the cage from start to finish. Okada came out of the gates blazing, peppering Ando with a torrent of heavy blows from different angles.

However, the match’s complexion changed in the second round when the latter made it a competitive contest, repeatedly tagging the champion with combinations. When the fight hit the canvas midway point of the second stanza, Okada and Ando were neck-and-neck in battling for dominant position on the mat.

As Okada placed himself on his foe’s back and fished for a rear-naked choke, he tried to soften up Ando’s defense by punches but strayed into illegal territory with several landing on the back of the head. He was deducted a point but the action only intensified after the interruption. Okada and Ando unloaded blistering combinations and momentum-shifting takedowns, pushing each other to the limit and drawing loud cheers from the raucous crowd.

Both men were going all out for the win but the point deduction would prove to be crucial. The fouls essentially cost Okada the win, with the fight rendered a draw.

In his post fight interview Okada called out Shoko Sato. But he had nothing but respect for his opponent,

“First of all, thanks to Tatsuya Ando for the challenge. I wanted to win and defend, but he is a monster. I am still glad that the belt stays with me,” said Okada.

Okada kept his win-loss standing of 15-4, but this is the third time that his bout ended in a draw. Meanwhile, it is the first time that Ando (10-2) experienced a stalemate in his five-year professional career. 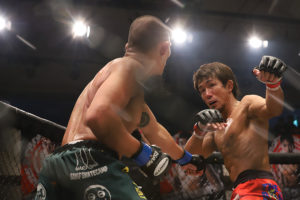 The co-main event definitely gave the fans their money’s worth as Yutaka Saito (17-4) only needed 77 seconds to finish off Hiroyuki Takaya (23-15) via technical knockout.

In other matches, Megumi Sugimoto (3-1) sustained her winning groove under the Shooto banner with a second-round stoppage triumph over Kyu Kitano (3-2). She also advanced in the finals of the Shooto Infinity League.

On the other hand, Yoshiteru Kubomura (5-5-2) left no doubt in his rematch with Takeaki Kinoshita (1-2-1), steamrolling his rival in just about a minute of their featherweight tussle.