The featherweight fight between Song Yadong and Marlon Vera at UFC Jacksonville has already caused some confusion. After various media reported that it was happening the Ecuadorian took to Twitter to accuse his Chinese opponent of having pulled out.

It also seemed odd that two ranked bantamweights would be facing off in a 145lbs fight. But Yadong, who is currently in Sacramento training with Team Alpha Male, was able to explain the situation,

“I was having some issues with my visa at that time, so the UFC was trying to look for a back-up fighter. It’s not that I pulled out. Thankfully, it got resolved just in time,” he said about Vera’s Tweet.

The 22 year old also explained why the two were fighting at featherweight. He says the fight was only confirmed late last month, giving them very little time to cut weight in what is already an unusual training camp,

“It has been different under this pandemic situation. It is more towards self-training with conditioning and private training with different coaches,” he said. 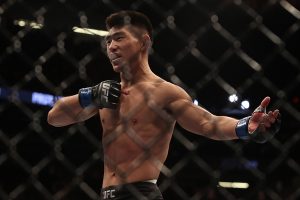 Had Yadong not relocated to Sacramento the opportunity to fight for the UFC during this period would never have emerged. He feels very fortunate to be training at Team Alpha Male and says the camp has been behind his impressive recent results,

“I have a tremendous support system in my training. They know how to bring out the best in me. It is always exciting to prepare for a fight. Without my team, I wouldn’t take this fight. It’s them that keep me focused,” he said.

At the age of 22 he is one of the younger fighters on the roster. He thinks the coaches at Team Alpha Male have helped him develop experience beyond his tender years,

“They helped me build up a more mature system of MMA fighting. They also helped me understand deeper about this game,” Song shared through his wife who also serves as his translator.

Yadong won his first four fights in the octagon. But he is coming off a majority decision draw with Cody Stamman at UFC Washington.

A point deduction in the opening round clearly cost Yadong the fight and he looks back on that bout with a sense of real frustration,

“I’m really disappointed in myself for losing the point in the first round. It distracted me, and I lost my rhythm. I never had the chance to have the fight under control,”

He can put that disappointment well and truly behind him with a win this weekend. For Yadong it is an opportunity to move up the rankings and he is feeling confident heading into the fight in Florida this Saturday (local time),

“My speed and power will do the talking. I will fight with my tempo, and I will not be affected by other things. I will be focused (and) I promise you that I will put on a great show.”