A bantamweight bout pitting Song Yadong against Cory Sandhagen is reportedly in the works for September 17th. There isn’t a card currently confirmed for that date but the UFC is putting one together and already has a main event lined up.

Neither the show itself nor the fight has been officially confirmed. But the news was broken by the reliable Marcel Dorf on Twitter this week:

🚨Got told the UFC is working on a bantamweight fight between Cory Sandhagen and Song Yadong. The fight is targeted to headline the FN event on September 17th.🚨 pic.twitter.com/hAxDjUFwNI

Yadong (19-6-1) has been one of the big success stories among the influx of Chinese fighters to the UFC roster. The 24 year old was signed in 2017 and has been holding his own in the 135lbs division for the past five years.

Yadong is currently riding a three fight winning streak and is coming off a career defining KO of Marlon Moraes at UFC Vegas 50. That win earned the Chinese bantamweight a $50,000 USD bonus.

Long term viewers will have noticed how Yadong’s English has improved during the course of his UFC tenure. He is based permanently in Sacramento and trains at Team Alpha Male.

Sandhagen (14-4) holds wins over Frankie Edgar, Marlon Moraes and John Lineker. But the 30 year old is coming off back to back losses and will be looking to get back to winning ways here.

Those defeats did come at the hands of two of the best bantamweights on the planet. He dropped a decision to Petr Yan at UFC 267 in a bout which had the interim bantamweight title on the line.

Prior to that he had been beaten by split decision by TJ Dillashaw who is reportedly set to fight for the 135lbs strap next. Yadont is ranked #9 while Sandhagen is ranked #4.

That makes this the biggest fight in the career of the Chinese bantamweight so far. A win would help him crack the top five and move within touching distance of a title shot. 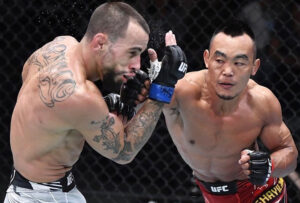 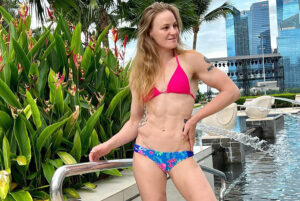 Valentina Shevchenko relaxes by the pool after UFC 275