AFC 12 took place at the KBS Arena Hall in Seoul on Monday night and saw two inaugural champions crowned. However the headlines would be dominated by a disappointing showing from veteran Choi Hong-Man.

Both Song Young-Jae and Sasha Palatnikov established themselves as the kings of their respective divisions with gutsy performances. In the main event the former scored a come from behind victory over Seo Jin-Soo to capture the bantamweight title.

Song was faced with adversity from the start, getting dropped with a clean left hook less than a minute in. He bounced back up and chased Seo into the fence. Even though Song threw his opponent to the ground, Seo instantly swept him.

From top control, while controlling the neck, Seo stayed heavy and connected with punches sparingly. He later landed in mount and let go of the neck. This allowed Young to roll over and expose his back. The first round ticked down with Seo connecting with punches and working the hands for the rear-naked choke. 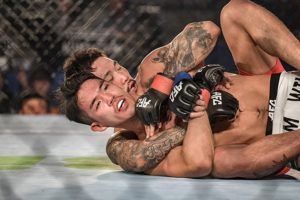 The second period was a series of takedowns and wild exchanges with Seo landing more significant strikes in the end. Going into the third round, Song had to feel a sense of urgency.

While face to face, Song began throwing kicks to the calf that had Seo feeling the effects. But a flurry by the Zombie MMA product had Song rocked and staggering to clinch up and slow the pace.

From there, Song again successfully landed a trip takedown and had Seo in turtle position with the neck secured.

He moved to the back and locked in a body triangle. Once Seo had his chest to the floor, Song hammered down nearly thirty unanswered punches from back mount.

Song (4-0-1) is crowned the bantamweight king of the division while keeping his undefeated record intact while Seo (5-3) is finished for a second time by the Team Wild representative and will now need to make the long climb back to contender status. 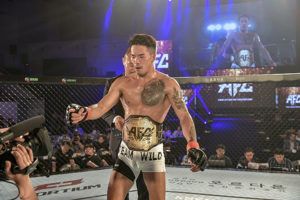 The first title tilt of the night was a back and forth clash between Sasha Palatnikov and Son Sung-Won for the middleweight strap. Ultimately the Hong Kong native defeat the Korean by decision.

Many expected this affair to play out on the feet from distance with technical striking on display but grappling and top control were the keys to victory. After a few exchanges in the first minute, Palatnikov was able to clinch and drag Son to the mat with a timely single leg.

From the guard, he was effective in keeping position and scoring points with punches to the body and head. Son attempted a few submission throughout the first but Palatnikov slipped out with ease and continued his game plan. 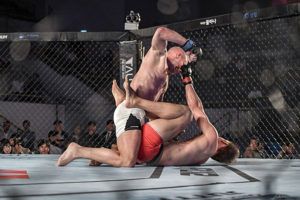 At one point, Son upkicked his foe in the left eye while trying to create space to get up. The referee stopped the action, the doctor came in to check on Palatnikov and the South Korean was given a yellow card.

The second through fourth rounds was confusing from the judge’s standpoint. Each time one would near a fight-ending sequence, the other would narrowly slip out.

It was the definition of how a fight can ebb and flow when two individuals want the title of champion. The grueling pace allowed fatigue to slowly creep in with both men visibly slowing down.

Heading into the final round, both corners seemed to realize that whoever takes the last five minutes would have the belt wrapped around their waist. 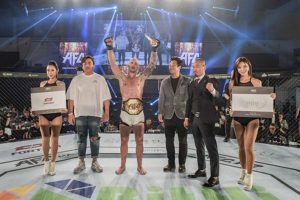 Palatnikov came out and immediately dragged Son to the canvas and commenced to throw hard punches. From there he stayed patient and took his time, moving from side control to mount in a very methodical way.

Eventually, Son gave up his back and Palatnikov locked in a body triangle to end the round punching his opponent from a position he was too tired to get out of.

Once the scorecards were read and the belt was distributed, Palatnikov (4-1) made history by becoming the first ever Hong Kong-born champion.

Meanwhile, Son (9-7) loses after sitting on the shelf for almost two years. He will soon be heading back to Japan to defend his Heat welterweight title.

In the co-headliner, Choi Hong-Man returned against Hungarian kickboxing world champion David Mykaylov and was wrecked with vicious overhand lefts in 49 seconds. It is very clear that The South Korean giant is well past his prime.