Srisaket Sor Rungvisai and Juan Estrada will rematch on Friday night (local time) in California. The two fighters tipped the scales at 114.2 and 114.6lbs respectively ahead of the matchup which will have the Thai fighter’s WBC 115lbs strap on the line.

Coincidentally this fight will take place in the exact same venue as the first match. At The Forum in California last year the two men put on a ‘Fight of the Year’ contender with Srisaket winning by majority decision.

Srisaket (47-4-1) went on to claim a lopsided decision win over Iran Diaz in Bangkok while Estrada (38-3) has beaten two experienced Mexican opponents in California.

You can watch the entire weigh ins here:

The show is being promoted by Matchroom and will be broadcast by DAZN in some regions. Srisaket emerged as an unlikely star after beating Roman Gonzalez twice, the second win a devastating KO.

The Thai is riding a 20 fight winning streak into this world title bout. Meanwhile Estrada has won 12 out of his last 13 and will have the opportunity to avenge his sole defeat during this period.

Srisaket did not look at his best against Diaz and was knocked down in that bout, although the referee ruled it a slip. The 32 year old is a veteran of 52 fights and will be looking to cement his status as one of the top pound for pound fighters in the world with a win this weekend. 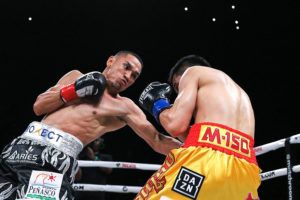 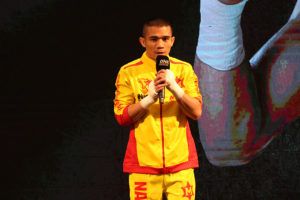