Akihiro Fujisawa has taken an unconventional route to the ONE Championship roster. The 39 year old made his debut back in 2008 but didn’t get an opportunity to compete on Asia’s biggest stage until a decade later.

Fujisawa got his big break after moving to Bangkok. He won two fights out of two for local promotion Full Metal Dojo and was rewarded with a bout on the first ever ONE Warrior Series show.

He won by first round stoppage and within three weeks found himself making his ONE Championship debut. Last year he won three bouts out of three, culminating in an extremely impressive late stoppage of Rockie Bactol. Fujisawa was flying but the veteran suffered a setback at ONE: ‘Roots of Honor’ in April. He was submitted by Roman Gonzalez, a fighter renowned for his ground game, but has vowed to bounce back from that disappointing defeat.

He will have the opportunity to do just that when he fights Aleksi Toivonen at ONE: ‘Masters of Destiny’ on Friday and Fujisawa hopes it will be the start of an unlikely run towards the title,

“One day I would like to fight Demetrious Johnson. I want to beat some of the fighters from the Flyweight Grand Prix to get the chance to fight DJ.” 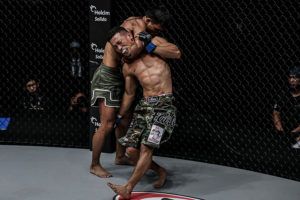 Fujisawa is not short of ambition. There are several fighters aged over 40 competing in ONE Championship’s heavier divisions but in the lower weight classes it is something of a rarity.

That’s something the Japanese fighter is conscious of and he hopes his success can inspire other veterans,

“I want to inspire the older generation who is watching ONE by showing them what a 39 year-old fighter can do,” he says.

The defeat against Gonzalez was the first of his professional career. But Fujisawa sees it as a valuable learning experience that will make him a better fighter,

“Although losing was regrettable, I learned a lot from the defeat. I lost last time under the pressure to remain undefeated, but I have tightened my mindset and technique for this fight,” he said. Having made his debut over a decade ago Fujisawa is very experienced in terms of time spent training. However he has only competed six times as a professional.

One thing Fujisawa has never done since joining the professional ranks is left a decision in the hands of the judges. Four of his fights have finished in the first round and two of them in the third.

Coincidentally Toivonen has never been the distance either. This might explain why this particular flyweight fight appealed to matchmakers.

It throws together two once beaten fighters whose fights always end decisively and Fujisawa doesn’t expect this record to end on Friday,

“I have no experience of going to a decision in my professional career and neither does Aleksi. The match will end by KO or submission whether I win or lose.” 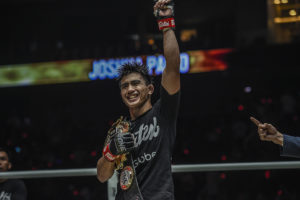 Eko Roni Saputra is ready to face anyone

Reece McLaren wins at ONE: ‘Reign of Dynasties’