Stamp Fairtex says that Angela Lee is her idol but the Thai still plans to beat the champion at ONE: ‘X’ later this month. She knows exactly how she wants to do it too.

Stamp says she will land heavy strikes until Lee ‘can’t take it anymore’,

“I plan to keep my distance with my footwork, punching, and kicking. The longer I can hold her off, the more she’ll get exhausted. My plan is to take my time and perform each strike as heavy as possible. I’ll let her drain herself out. Once I see she can’t take it anymore, I’ll get closer and finish her off.”

Stamp was still a teenager when Lee first won the atomweight title. She has been watching the champion’s fights for many years and it is fair to say the she is a fan,

“I see and praise (her) as my idol because of her fighting style and how determined she is. She is a different person in the ring. Out of the ring, she is a cheerful and friendly person, but once she gets in the cage, there is no giving up, no more being friendly. Up there, she is the true fighter.” 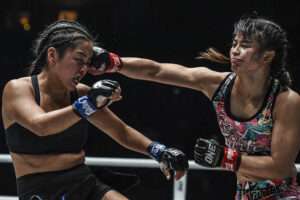 Stamp knows she will not be the favourite in this fight but is embracing her underdog status,

“I see it as such an honor to fight her and I’m really glad that once in my life I get to fight my idol. I see myself as an underdog but I am now ready to get in the circle and fight Angela Lee for the belt, and I will give my best attempt.”

Lee is the only fighter to ever hold the ONE Championship atomweight belt. She has been the champion since 2016 and has beaten four different challengers so far.

But Stamp thinks that the division is in danger of getting stale and it’s time for a change of champion,

“It’s been so long that Angela Lee has held her championship that it’s getting boring in the weight class. It’s time for a change. It’s time for a new champion. I’ll be the new ‘Unstoppable’.”

‘Unstoppable’ is Lee’s nickname but Stamp sees her opponent’s lengthy absence from competition as a clear weakness,

“Of course, Angela Lee hasn’t been in the circle for about two years. Nothing would stay the same. I have an upper hand from my fitness and readiness.”

She thinks Lee might have issues with strength and stamina after taking a prolonged break to give birth to her first child,

“I personally think that when Angela Lee got pregnant, her body stopped functioning for fighting for two years. This is like a new beginning for her body in every aspect. For training and strength, I think those will be decreased, but I think her skills are still intact.”

It sounds like Stamp does not believe Lee will be capable of going the distance. She thinks her opponent will need to secure a quick submission if she wants to win,

“I think Angela Lee will try to drag me down to work her ground game, which is what she does really well. But it’s also a drawback for her because her strength is not that high now. After taking me down, she will try to submit me as soon as possible because, if she tries to control me, it would be a waste of her energy.”

It sounds like Stamp has a very specific idea of where her opponent’s strengths and weaknesses lie and how the fight will play out. On March 26th we will find out whether she was right!