Angela Lee will be defending her atomweight title against Stamp Fairtex in the main event of ONE: ‘X’. But the champion will also be keeping a close eye on another fight in the division.

Denice Zamboanga is rematching Seo Hee Ham and the champion remembers the first fight between them well,

“I’m glad they’re running it back. You know there’s a lot of, how would I say, different factors going into a fight, you know, training camp preparation, injuries, things like that,” she told Sports Keeda.

The judging was controversial with Han handed victory despite Zamboanga appearing to have done enough to win. But overall Lee was not too impressed,

“I don’t know, I mean, the first fight, it wasn’t too impressive. I think that nothing stood out really from either fighter and I think the main highlight of it was when Denice got cut. And that was just accidental. I’m hoping to see more urgency from both fighters.” 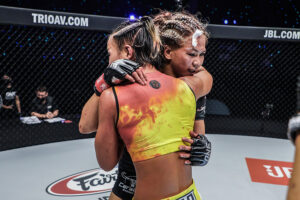 With the first fight having ended in such a controversial fashion she hopes both atomweights will make more effort to find the finish in the rematch,

“The first fight was close. So I think that both ladies are definitely going to want to go for the finish this time.”

A title shot is probably on the line for the winner of the fight between Ham and Zamboanga. But they are both going to have to do a lot better than they did last time out if they want to impress the current champion!