ONE Championship kicked off its first event of 2020 in style on Friday night, staging a stacked fight card in Bangkok that showcased the best and brightest from MMA, Muay Thai and kickboxing. In a highlight attraction local favourite Stamp Fairtex took on Puja Tomar, scoring the fourth straight win of her career.

The 22-year-old immediately asserted her authority by drilling Tomar with a torrent of punches and knees in the clinch. When the Indonesian tried to disrupt her striking rhythm  she miscalculated the execution of a judo toss, and ended up giving up her back.

Stamp capitalized on the opportunity, unloading a relentless volley of ground-and-pound before attempting to latch on a rear-naked choke. Tomar successfully defended by trapping her left arm but the Thai persevered

Stamp had back mount and continued to dispense punishment with her hands and elbows, compelling the referee to jump in and call a halt to the proceedings at 4:27 of the first round.

With the impressive win, Stamp kept her unscathed MMA record intact and improved her standing to 4-0. On the other hand, Tomar fell to 4-4. 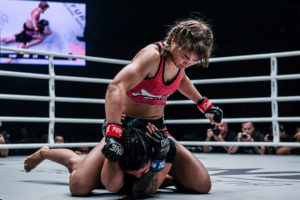 Le, 34, flaunted his fluid striking right off the bat, repeatedly hammering Takahashi with combinations stinging punches and lashing kicks to the midsection.

Takahashi elected to fight fire with fire but was knocked down by a right hand. Le followed up with a barrage of hammerfists and punches and, seeing the gravity of the damage, the referee quickly stepped in to wave the bout off.

Le, who has now won three matches in a row via knockout on the ONE Championship stage, makes a strong case to challenge Martin Nguyen for the featherweight strap later this year.

In other MMA bouts, American standout Joey Pierotti (12-2) received a rude welcoming in his maiden promotional appearance as he bowed to Raimond Magomedaliev of Russia via first-round submission.

The grappling brilliance of Japan’s Ayaka Miura (10-2) was in full display once again, defeating Brazilian vixen Maíra Mazar (6-3) with her trademark Americana submission in the second round of their women’s strawweight clash to claim her third-straight win under the ONE Championship banner.

Serving as the curtain-raiser contest of the night, Filipino fighter Roel Rosauro (5-3) finally experienced his moment of glory in the promotion, picking apart Indonesia’s Yohan Mulia Legowo (8-9) in the stand-up courtesy of his Yaw-Yan pedigree to cruise to a unanimous decision victory.