Su Mudaerji is one of the most exciting up-and-coming talents at flyweight and he followed up November’s first round finish at UFC Vegas 15 with a unanimous decision win over Zarrukh Adashev.

The 24-year-old knocked out Malcom Gordon in 44 seconds just six weeks ago, and again looked sharp despite the quick turnaround as he outclassed his opponent from Uzbekistan.

Adashev, who got knocked out in his UFC debut against Tyson Nam back in June, started the contest in a positive fashion with an overhand right that landed cleanly. But Mudaerji didn’t look too worried and began to use his superior reach effectively, stepping into range to throw the jab before swiftly moving out of the danger zone.

The Chinese fighter’s movement was smooth, he employed almost constant feints to keep Adashev guessing and showcased an impressive array of strikes. He nailed the Uzbek with a left cross in the second round as he continued to pressure his opponent.

Adashev showed some good level changes and caught Mudaerji with a decent left hook on the break. He also began to find more joy when closing the distance, this time landing a powerful right hand, but it would prove to be a false dawn for the 28-year-old.

Mudaerji’s timing was impeccable as he produced the best moment of the fight, dropping Adashev with a right hook as the Uzbek stepped in.

The Chinese fighter, who used to work as a shepherd in his native Tibet, continued to lead the dance in the third. Utilizing leg kicks and high kicks, coupled with elusive movement, he was able to control the round and keep out of Adashev’s range.

Make that 3️⃣ straight wins!@Mudaerji_Su gets the dub.

However Mudaerji had hoped to win the fight in a more emphatic manner. Speaking afterwards he said,

“Actually, I’m not very satisfied with my performance. I have the ability to do a lot more. It’s not what I expected or planned because it wasn’t my game plan for the fight to go that way. I didn’t really show my talent or ability. If I showed it, I would have knocked him out in the first or second round. My plan is to enter the top five and maybe even become a title challenger.”

"My plan is to enter the top five and maybe even become a title challenger."

In the main event Michael Chiesa (17-4) claimed a unanimous decision win over Neil Magny (24-8). The American was able to take his opponent down and keep him down for virtually the entire 15 minutes.

It was a frustrating night for the Englishman who made it to the final bell but was never able to mount any effective offence. Chiesa improves to 17-4 while Magny drops to 24-8.

The evening’s co-main event featured Warlley Alvez against Tunisian-born Mounir Lazzez who fights out of Team Nogueira Gym in Dubai. The Brazilian came storming out of the blocks with a beast of a right hand before landing with some elbows and knees in the clinch.

Alvez launched three successive body kicks to the ribs of his opponent as they broke from the clinch as the local fighter was sent collapsing to the canvas in pain. Alves followed up with some powerful finishing shots to take his record to 14-4. Lazzez slips to 10-2. 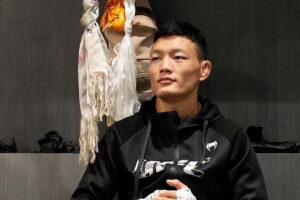