In the main event Gaonar PKSaenchaigym faced Superbon Teeded99. This was the third fight between them, with Gaonar, a former Lumpinee stadium champion, having beaten Superbon, a former Thailand champion, by decision, two times at Rajadamnern.

Gaonar started slowly, soaking up the attacks of Superbon and coming back with some fast punches. Superbon slowly stalked forward, but looked wary of the dangerous elbow counters of Gaonar. 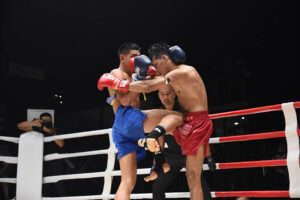 Superbon upped the pressure in the third, marching forward into the clinch and started to hammer in heavy knees to Gaonar’s body. Gaonar started to open up with a few hard punches.

Superbon carried on pushing forward in the fourth, closing down Gaonar and landing with more heavy knees in the clinch. Gaonar tried to keep him off with punches, but it looked like the knees of Superbon had slowed him down now.

There was a brief stir with 40 seconds left in the round when Gaonar connected with a few hard straight lefts and a solid elbow, but Superbon weathered the storm. In the final round Gaonar was forced to come forward and came out firing in hard punches looking to dramatically turn the fight around.

A few shots got through, but nothing troubled Superbon and Gaonar slowly ran out of steam. At the final bell Superbon was awarded the decision win. 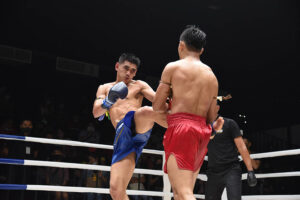 The first of the main TV fights was a rematch between Sao-Ek Sitchefboontham and Kumarndoi Petchjaroenwit. Sao-Ek the Rajadamnern stadium Super-Bantamweight champion, took a decision win over Kumarndoi, a former Omnoi and WBC World champion, back in September.

The action was typically slow to get going in the opening round, with both fighters testing each other’s defences. It looked like it would be a typical uneventful start, but with 30 seconds left in the round Sao-Ek stepped in to attack, but walked onto a perfectly timed left hook from Kumarndoi and dropped for an eight count.

Kumarndoi typically fights with a strong, aggressive, walk forward style, but the knockdown turned the fight on its head as the typically slick, counter fighter Sao-Ek was forced to push forward to try and turn the fight around. 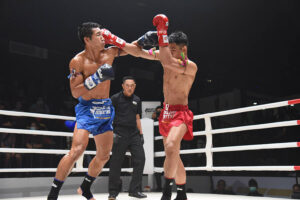 Sao-Ek stalked forward opening up with hard punches and elbows and Kumarndoi looked to come back at him with some explosive counters. Sao-Ek’s persistence paid off towards the end of round two when he managed to open up a cut on Kumarndoi, but it didn’t look too serious.

Sao-Ek had no choice but to keep pushing forward, but again Kumarndoi did a good job of soaking up most of the attacks and countering back. With a minute gone in the fourth round Sao-Ek managed to find the target again with a sharp elbow, opening a nasty cut on the left eyebrow of Kumarndoi, that immediately started pumping out blood.

This spurred on Sao-Ek more and he pushed forward looking to inflict more damage. With a minute left in the round the referee stopped the action to take Kumarndoi to see the ringside doctor, who checked the cut and called off the fight, capping a stunning turnaround for Sao-Ek. 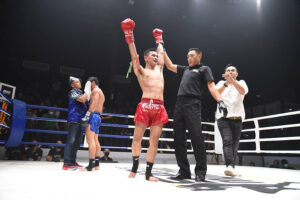 There was a lot of pre fight hype surrounding the next match between Boonlong Klongsuanpluuresort and Farpennung Por Lakboon. Boonlong had won his last two matches by stopping his opponents with devastating left kicks to the arms and his manager, Nuttadej Wachirarattanawong, had gone online a few weeks prior to the fight to state that he would be giving Boonlong a 100,000 baht bonus if he was able to stop Farpennung the same way.

Farpennung’s boss Sia Kaek, the owner of PKSaenchaimuaythai gym responded by stating theat Farpennung would also have a significant win bonus on offer and said they would be looking to shut down Boonlong with clinch and knee pressure and not give him any space to throw his powerful kicks.

Both eased into the fight early on. Boonlong got off with a few hard kicks, but Farpennung’s stance and footwork had him always ready to bring up his right leg to try and block. In round two Farpennung started to stalk Boonlong down, taking the fight inside and opening up with hard knees. 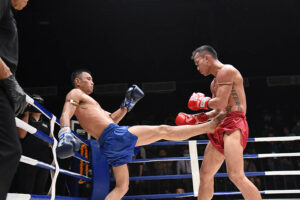 Boonlong got a few kicks off, but was given very little time by Farpennung to set them up. Round three saw more of the same with Farpennung coming in even quicker and hammering in hard knees. Boonlong looked to try and trade back with knees, but came off second best in almost every exchange.

Farpennung carried on marching forward in the fourth getting a strong lock around the neck of Boonlong as he pounded his body again with hard knees. Boonlong tried to fight back throughout with some hard elbows and knees, but looked more and more ragged as the round went on.

Farpennung eased off in the final round, looking to just control the ring and protect his lead. Boonlong pushed forward a little looking to open up with punches and kicks, but the knees of Farpennung had taken their toll and Boonlong’s shots looked like they had lost most of their snap.

Farpennung took the decision win at the final bell. 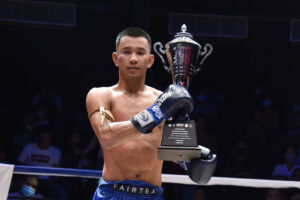 Two of Onesongchai promotions stars took to the ring next with Chorfar Tor Sangtiennoi taking on the veteran Luknimit Singklongsee. Chorfar was the first to really get going as he started to stalk forward in round two. Luknimit carried on soaking up Chorfar’s pressure, looking like he was saving himself for the later rounds.

In the third Luknimit came to life looking to engage Chorfar in the clinch with solid knees. Both traded hard elbows and a short way into the round Luknimit had picked up a cut on his forehead. With just over a minute to go in the round Chorfar fired in two fast, rising elbows in the clinch and Luknimit dropped to the canvas, where he was counted out.