Kazuma Kuramoto is coming off a big win at Rizin 26 on New Year’s Eve. The Shooto veteran came to the promotion for the first time, saw Taiyo Nahakara standing in the opposite corner and conquered the veteran bantamweight in under three minutes.

It was a good night all round for Kuramoto who says there is only one disappointment,

“I wish I executed a suplex! But I am not surprised I finished him fast because if I can get the fight into my rhythm and can land my offense then I can KO very quickly.” 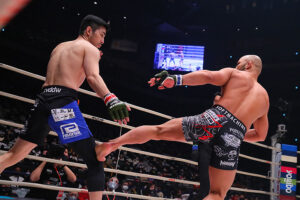 The Shooto veteran is known for his suplexes and says it is a technique he first started using during his amateur days,

“The very first time I did suplex in MMA fight was my very first amateur MMA fight. From that fight, in almost every fight, I executed a suplex. The reason is simple; I can damage my opponent’s head.”

Although he didn’t get to showcase his trademark technique the 34 year old is broadly happy with his performance against Nakahara,

“I was able to show what I worked on my training but when I look back on that fight, I know I have to keep my chin lower.” 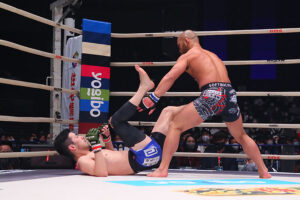 He made his MMA debut relatively late in life. Kuramoto was already in his 30s when he had his first pro fight and he didn’t suffer his first defeat until 2020.

That loss came in a bantamweight title fight at Shooto 0531 and Kuramoto is unsure whether he will ever get the chance to challenge for that strap again,

“Right now I am under Rizin exclusive contract but I never won Shooto title so if there is an opportunity I would like to fight for the title again.”

With fighters based outside of Japan currently unable to compete on Rizin cards there should be no shortage of opportunities for Kuramoto in 2021. He has not set any targets for the year and prefers to focus on the process rather than the specific result,

“I still haven’t set my goal for 2021 yet. If continue going through good training it will produce good results and if I can perform at my best I know I will achieve all my goals.” 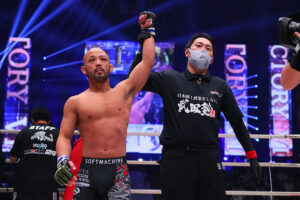 Given his penchant for suplexing opponents it is no surprise to hear that Kuramoto has a background in wrestling. But he also trained extensively in to more traditional martial arts,

“I began training wresting at age 13 but before that I did traditional karate and judo too, I am a black belt in both.”

In order to prepare for his Rizin debut Kuramoto trained with several other fighters on the roster,

“I trained at Me We, under Tsuyoshi Yamazaki, and also at did striking training with Lion Takeshi at Risin Sun. I also went to Sonic Squad to spar with Ulka Sasaki, Naoki Inoue and Tetsuya Seki.”

December 31st has historical significance in Japanese MMA. Kuramoto is well aware of this and was delighted to make a successful Rizin debut on such a resonant date,

“Finally I came to this big stage, is how I felt. I am so happy I was able to fight in such a big show like Rizin on New Year’s Eve.”