Naoki Inoue has won three fights in a row since returning to Japan. The 23 year old is following in the footsteps of Kyoji Horiguchi who only really made a name for himself after leaving the UFC and signing with Rizin.

Horiguchi challenged for the UFC flyweight strap. But the promotion didn’t value him highly enough to make him a competitive offer once his contract expired and he decided to take his services to Rizin instead.

Inoue has taken a similar route. He didn’t enjoy the same level of success in the UFC as Horiguchi but he is seven years younger than the former Rizin bantamweight champion so time is very much on his side.

Inoue knows exactly what he wants to achieve during this period in his career,

“I want everyone in Japan to know my name.” 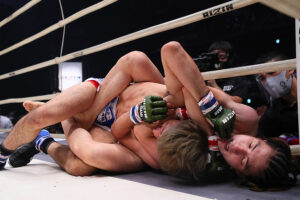 For Inoue the plan is very clear. He wants to overcome Motoya and then challenge the winner of next week’s 135lbs title fight in 2021,

“I would like to win this upcoming fight then fight for the title sometime next year.”

Inoue has already won two fights out of two for Rizin this year. With the bantamweights based outside of Japan currently unable to compete many felt he had done enough to earn a shot at the belt and the UFC veteran admits he was surprised to see Horiguchi overtake him,

“I was surprised. Since this is his come back fight I thought he would fight someone other than Kai Asakura.” 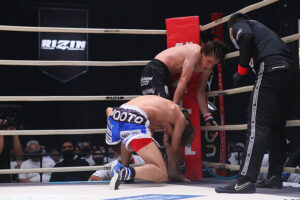 However Inoue says he was not expecting to fight for the title this year and always knew he would need more than two wins for the promotion,

“I never expected to get a tilt shot this year. I only won twice in Rizin so I figured, I would have to beat someone else but if I win this fight I might get a title shot. I would like to fight for the title next year.”

Motoya is a former flyweight and bantamweight champion with Deep. He is a veteran of eight Rizin fights and Inoue has bee following his opponent’s career for years,

“Because I fought for Deep before signing with UFC I always thought someday I will fight Motoya. He is an all rounder and he rarely misses an opportunity to finish the opponent but, my impression is, his wrestling is not the strongest area.” 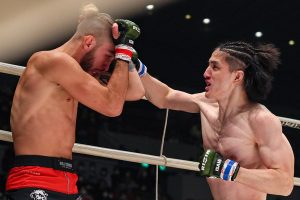 Inoue has spent a lot of time training in New York recently. It is not practical to train outside of Japan anymore but he says he has been able to put together a top tier training camp with some seasoned fighters,

“My base for this fight is Team Sonic Squad where I train with fighters like Ulka Sasaki, Caol Uno, Kazuma Kuramoto and Tetsuya Seki. Twice a week I do personals with UFC vet Takeya Mizugaki and I do strength and conditioning training with Takayuki Nagasue who works with fighters like Naoya Inoue and Tenshin Nasukawa.”

While Inoue believes his opponent’s wrestling is a potential area of weakness he has also been working on his striking with a well known kickboxer,

“(Takayuki Nagasue)  is also a striking coach so I have been sparring with Rise champion Shiro. I also go to this gym called Rakuness to work on stretching and body movements.”

It sounds like nothing has been left to chance and the 23 year old is also in constant communication with his sister Mizuki Inoue, a UFC strawweight who is recuperating from a knee injury in New York. His UFC career might not have gone according to plan but Inoue is looking to make it big back in his native Japan. 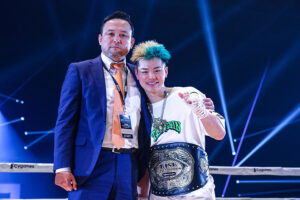