Takafumi Otsuka faced Rikuto Shirakawa in the main event of Deep 91 in Tokyo on Sunday. Unfortunately the fight lasted less than 30 seconds with the former sustaining what appeared to be a shoulder injury.

Shirakawa came charging out the blocks as soon as the bell sounded and appeared to catch Otsuka with a left hand. He looked to dish out further punishment to the former Deep 135lbs and 145lbs champion who was able to secure a body lock and get the fight to the ground.

Otsuka moved from top position to side control before taking Shirakawa’s back. The advantage was with the veteran but it soon became apparent that his opponent had sustained a serious looking injury to the arm or shoulder. 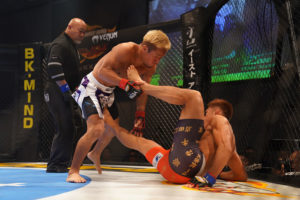 At Shirakawa’s request the fight was stopped with the finish coming at the 0:26 mark. It will go down as the 26th win of Otsuka’s career but is not a fight that is likely to feature prominently on his highlight reel.

Otsuka improves to 26-16-1 while Shirakawa drops to 7-7-1. Shinsho Anzai‘s comeback also ended prematurely with the UFC veteran sustaining a nasty cut that caused the contest to be called off at the start of the second stanza.

Anzai (11-3) looked the worse for wear but had done enough in the opening round to earn a majority decision win over Yoichiro Sato (21-11) with the fight going to the scorecards after just 39 seconds of round two. Yuki Ito (6-0) cemented his status as one of the top prospects in Japanese MMA with a submission win over Yamato Fujita (2-3) late in the opening round. The 22 year old flyweight softened his opponent up with ground and pound before sinking in the rear naked choke.

In the featherweight division Juntaro Ushiku (16-7-1) walked away with a unanimous decision win over Kyosuke Yokoyama (11-7). It was a fourth straight win for the veteran, who has spent the majority of his career competing for Pancrase.