Takashi Nakayama will defend his Pacific Rim 145lbs title against Keisuke Sasu at Shooto 0919. The event is set for Shibuya O-East on September 19th.

Nakayama (8-3-1) won the title with a split decision win over Mitsuhiro Toma at Shooto 0126 earlier this year. It was a third straight win for the 32 year old who has spent his entire career competing for the venerable Japanese promotion.

Sasu (6-1-1) is riding a four fight winning streak. The 25 year old is one of the top prospects in the featherweight division.

Also in the featherweight division Nobuki Fujii (20-11-3) has been matched with Jojo Goto (10-3-1). The former is coming off a decision loss at Shooto 0126 while the latter has won five in a row.

The third fight confirmed for the card is in the flyweight division. It pits Junji Ito (17-8-2) against Tateo Iino (14-6-1) with both men coming into the fight on winning streaks.

This represents a slight change to the Shooto schedule. The event originally expected to take place at the Korakuen Hall on September 21st will no longer be happening and has been replaced by this card. 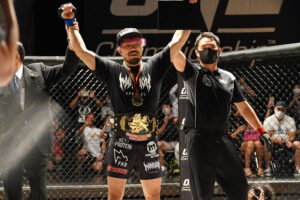