Takashi Nakayama promises to be confident not careless at Shooto 0126

Takashi Nakayama and Mitsuhiro Toma stood opposite each other inside the Shooto ring nearly three years ago when the two featherweights crossed paths in a two-round bout that served as the card’s co-feature attraction.

In March 2015, the Hirano Community Plaza in Osaka, Japan witnessed Nakayama, who only had five matches on his record at that time, score an upset victory at the expense of 15-fight veteran Toma.

Nakayama came out on top of Toma, forcing his compatriot to tap courtesy of a tight rear-naked choke with 20 seconds remaining on the clock in the final round.

On Sunday both men will have to face each other again in the co-headliner of Shooto 0126, which is set to take place at the legendary Korakuen Hall in Tokyo. This time around, the stakes are much higher as the featherweight championship will be on the line.

Although they have not seen eye-to-eye since their first encounter, Nakayama is fully aware of his rival’s career resurgence.

“The two of us had a history. A lot of things have changed. Since the loss against me, he has improved greatly. He won fight after fight, which led him to the title. I must admit that I am impressed with what he did for his career,” he said through his interpreter. Since bowing to Nakayama, Toma has won five of his last six outings, with three coming by way of knockout. During that span, he captured the vacant featherweight strap in his June 2018 rematch versus Derricott Yamamoto via first-round technical knockout.

Following a unanimous decision loss to former champion Takeshi Inoue in a non-title contest three months later, Toma returned to action with a bang, successfully defending the title by outpointing Akira Takano this past June.

On the other hand, Nakayama was victorious in three of his recent five bouts. 2019 was also a good year for the 32-year-old Chiba native, acing his two assignments.

Nakayama sees a much tougher duel with Toma on Sunday. However, he is confident that he will have his hand raised in triumph once more.

“I believe it will be more difficult because he has shown improvement. Mitsuhiro Toma has now a good stand-up game and has become more intelligent in his approach. But I know I can still win against him,” he stated. 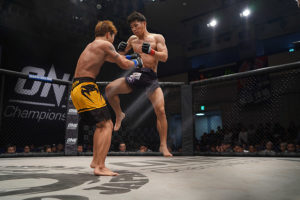 The challenger accepts that Toma can give him a lot of problems if he does not bring his A-game, but he has a few tricks up his sleeve that can help him turn the tables in the rematch.

“I don’t want to be tentative and just look at what he brings. I can’t be slow in my reaction. I need to go in hard and fast. Overwhelming him with my attacks will be the key,” Nakayama shared.

Though Nakayama will go into his second meeting with Toma with the familiarity of the champion’s capabilities, he is far from complacent.

“I am confident, but I can’t be careless. He has the belt, so he is the champion for a reason. On Sunday, I will prove that I can beat him again,” he declared.