Takeru: ‘I’ll regret it forever if I don’t fight Tenshin’

Rizin recently released a video in which Takeru spoke about the prospect of fighting Tenshin Nasukawa. The K-1 super featherweight champion is desperate for this kickboxing super fight to come together.

It was a major surprise when Takeru appeared at ringside for Rizin 26. He is still under contract to K-1 and was set to defend his title against Leona Pettas at K’Festa 4 yesterday.

That event was postponed due to the rising number of Covid-19 cases in Japan. But Takeru’s appearance at the Saitama Super Arena on New Year’s Eve was seen as a significant step forward in negotiations for the Tenshin fight.

There appears to be a willingness for K-1 and Rizin to work together to make this fight and Takeru certainly hopes it will happen,

“If this fight doesn’t happen not only will I regret it as a fighter but I will regret it for life.” 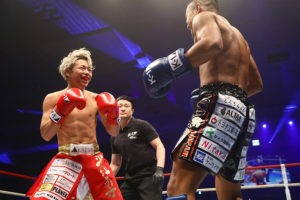 He could not have made it any clearer that he wants the fight to happen. But Nobuyuki Sakakibara went into a lot of detail about the work going in behind the scenes and the co-operation between the two promotions that would be required to put this dream match together,

“We’ve contacted them (K-1) several times about making it happen. We all need to compromise just a bit. Realizing this fight should be everybody’s number one priority.”

Takeru is a man of few words. But the 29 year old hopes his actions, in terms of turning up at Rizin 26, will speak loudly,

“I wanted to show my message in a way to express my feelings. That’s the reason I showed up to the Rizin event,” he explained. 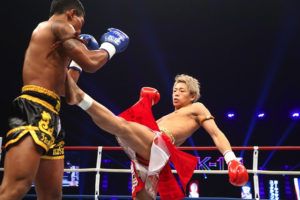 Sakakibara has a lot of respect for the kickboxing star. He recently signed Kouzi from K-1, who dropped a decision to Tenshin at Rizin 25.

But Sakakibara knows that Takeru will never turn his back on K-1 in order to sign with Rizin like Kouzi did,

“Takeru is sincere, he’s a good guy. The new K-1 brand is something he moulded, he couldn’t just leave everyone behind like Kouzi to make the Tenshin fight possible. It’s just not how he is. He felt it would be betraying the fans and everyone in K-1.”

Both Tenshin and Takeru have made it known that they want to face each other. Sakakibara has also gone public about his desire to put the fight together. 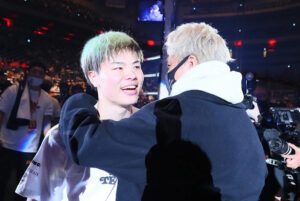 Takeru is under exclusive contract to K-1. As Sakakibara eluded earlier, he has become the face of the promotion and its most marketable star.

In the past K-1 has worked together with promotions like Pride and Dream to put on enormous events, almost always on New Year’s Eve. The kickboxing organization is under new management these days but it sounds like Sakikabara is hoping to relaunch these events which were called ‘Dynamite’.

A fight between Tenshin and Takeru would be the perfect headliner for a Dynamite card in 2021 and the latter seems to think it is a matter of when, not if, he finally gets to face off against his biggest domestic rival,