Tatsuya Ando could not have come much closer to winning a Shooto title. The 29-year-old fought to a draw with Ryo Okada last year in a bout which had the vacant bantamweight belt on the line.

The Japanese standout is set to collide with UFC veteran and compatriot Motonobu Tezuka at Shooto 0329, which takes place at the Korakuen Hall on Sunday.

The bout with Okada at Shooto Anniversary Tour 7th Round was an intense war of attrition for three whole rounds. Ando would surely have ended up on the losing side if his opponent hadn’t been deducted a point for striking the back of his head in the third and final round.

Ando acknowledges that it was a close contest with no clear winner,

“It’s a fight that could go either way. He did his best, and I did mine,“ he said through his translator.

“That’s what you get when you have two hungry fighters in one cage. It’s a close fight. Everyone shouldn’t be surprised.” 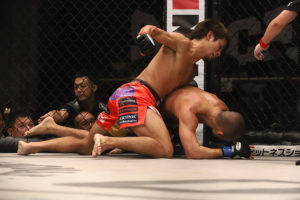 Ando feels that he will put himself as next in line for a shot at the Shooto bantamweight title if he wins his next assignment. But there can be few contenders in the division as tough as Tezuka,

“He has fought in different promotions. He has been in the UFC too. It’s definitely a tough test. But this kind of fight comes with a big reward, so I am up for the challenge. A title shot will be on the horizon after this,” he stated.

Tezuka is currently riding high on a three-fight winning streak. He made quick work of Tomohiro Hagino in his maiden Shooto appearance, choking out his opponent in the first round.

He then outclassed Kota Onojima over the course of three rounds to clinch a unanimous decision at Shooto 30th Anniversary Tour 8th Round. In his most recent outing, Tezuka stopped Mamoru Uoi by way of second-round technical knockout at Shooto 0126, extending his winning strife to three bouts.

Ando recognized the threat that Tezuka poses, but he leans on his youth and well-rounded skillset to topple his experienced opponent,

“I am the younger fighter here, and I bring a different dimension that could probably put him off his game. I am also comfortable fighting on the ground and in the stand-up. It’s not going to be easy, but I think I can handle him,” he shared. 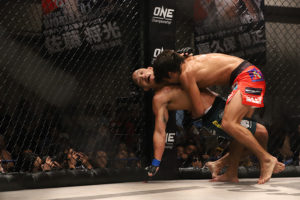 Ando has moved on from the disappointing outcome of his bout with Okada, but the lessons from the showdown have made him optimistic that some day he will finally call himself champion,

“It has made me a better fighter. It is just about going again to see if I can gain some of the rewards of my victory. Don’t expect me to lose because I will not stop until I can put a title on my shoulder,” he declared.