Reigning Deep middleweight champion Tatsuya Mizuno returns to action on Sunday aiming to resume the best run of his career and score a ninth consecutive win.

Judo black belt Mizuno, 39, is a veteran of the game with memorable stints in Pancrase, Dream, M-1 and ONE Championship. He submitted Joshua Robison last December 2019 at Deep 93 in a light heavyweight contest but has not fought since.

In early 2020 the Covid-19 pandemic struck and Mizuno, who is undefeated since 2016, had two fights postponed during a frustrating year. But he invested time in working on his weaker points, an attitude which might explain why he has enjoyed such remarkable longevity,

“The entire world was affected by the Coronavirus and two events were postponed,” said the 2010 Dream Light Heavyweight Grand Prix runner-up.

“However, I was able to practice a lot of weak points. It was an important time for me.” 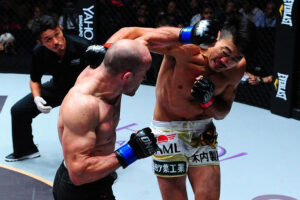 Mizuno has squared off against some of the biggest names from the glory days of Pride including Mirko Crocop, Gegard Mousasi and Sergei Kharitonov. He is still going strong as he approached his 40th birthday but admits that he was close to hanging his gloves up a decade ago,

“My battle with Melvin Manhoef was a turning point in my martial arts life,” said the Tribe Tokyo fighter proudly, before pausing, and adding,

Mizuno submitted Manhoef in the first round at Dream 15 to book himself a spot in the promotion’s light heavyweight Grand Prix final. He eventually finished as runner up, getting submitted by Gegard Mousasi at Dream 16. While reflecting on his 14 year journey in the sport it’s clear that Mizuno only wants to look forward. The dramatic upturn in his results, including a flurry of submission victories, has illustrated that he is still a standout performer in the Japanese MMA landscape.

However he insists there is no obvious explanation for his improved recent form,

“I have never thought about the reason for this winning run and I do not think about it.“

Mizuno does believe that having been in with some of the best heavyweights of all time gives him an advantage over his current adversaries,

“I just happened to win eight times in a row when the only thought in my mind was to win. I also think that the experience of fighting against some of [the] top fighters, like the Pride champions, gives me strength now.”

Mizuno takes on João Batista Yoshimura at Deep 98 on Sunday and will not be changing his tactics or building a specific game plan for the Japan-based Brazilian,

“I don’t have much information about Yoshimura, but I have no intention of changing myself or my style. I’m a professional fighter, so I’ll do my best to entertain the fans, that is my job.”